This post is simple. Start to finish, how we supercharged a MEV Exocet based on a Mk2 MX5. This is made up of older posts, but with everything in one place. We wont cover why we chose the supercharger over a Turbo, we just did.

Choice of supercharger Jackson racing supercharger kits are available as bolt ons but no longer seem to be made. Used ones are very expensive and seem to be rarer to find these days.

A more sensible option seemed to be using an Eaton M45 from a Mini Cooper, with some modifications, custom mounting brackets and pipe-works.

Other options such as a larger M62 charger also are available, but we just don’t have space for that in our engine bay (This is a general theme of this post, but the stock MX5 has much more space) 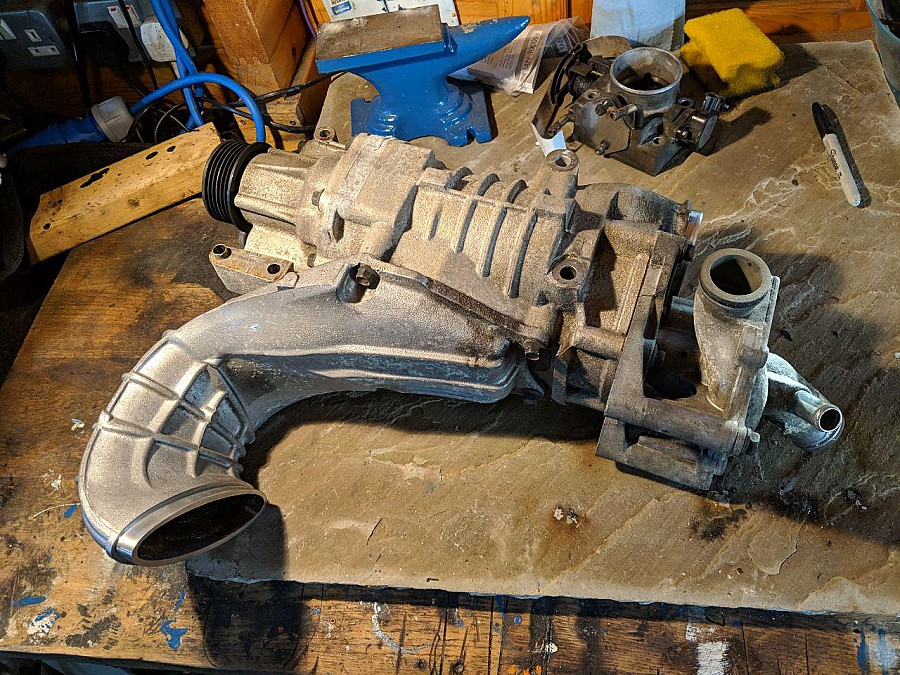 The water pump is removed as this is not needed, and the curved “horn” pip work from the Mini is too elaborate for our uses. The Eaton M45 works stock, bar having to cut a small chunk of the casing off and some blanking plates being added. 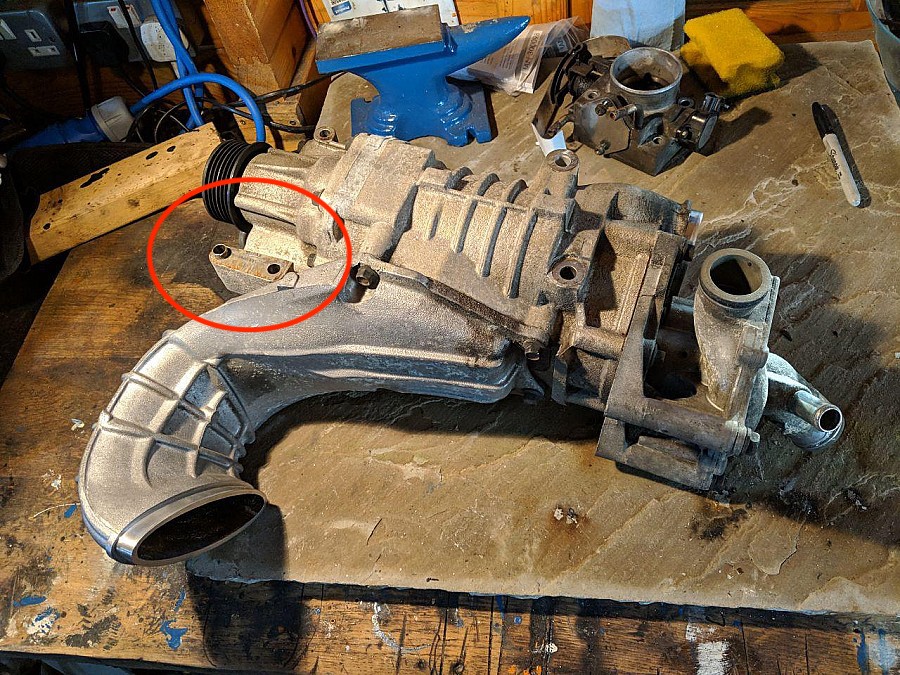 Removing this mount is necessary to make space for the outlet pipework, which you can see in the image below would foul against these mounts.

This section covers how you get air into and out of the supercharger to the engine. Fortunately a lot of kits exist these days to make this process more “Bolt on” and to require less fabrication.

The following kit: https://bofiracing.co.uk/product/sr1-supercharger-kit-for-mazda-mx-5-na-nb/ Seems immensely comprehensive. Given 1/4 of the cost is in the ECU, and the Eaton M45 runs to about £200 on its own, it seems very well priced. Some reviews suggest the build and finish quality of the parts is a little rough and needs polishing up, weve never owned one so, no comment.

Another option is TR Lane Fabrication - https://www.trlanefabs.co.uk/MAZDA-MX5-SUPERCHARGER-KITS.html who will make you all of the Metalwork for £550. TR Lane have been around for ages and seem reputable, but at the time of our build we emailed TR Lane as it wasn’t possible to buy direct from their site. We never got a reply so we sort of assumed they were closed down. Interestingly the listing doesn’t mention the blanking plates needed for the M45 or the Throttle body, so perhaps you need to make those yourself.

You can see from our own earlier posts where we made our own. Oddly a year on, with a better welder and a plasma cutter to hand, I’d probably give that a go again… but in the end we actually went for a kit from this guy - https://www.ebay.co.uk/usr/eddk2012?_trksid=p2047675.l2559

Let’s talk you through what you get. 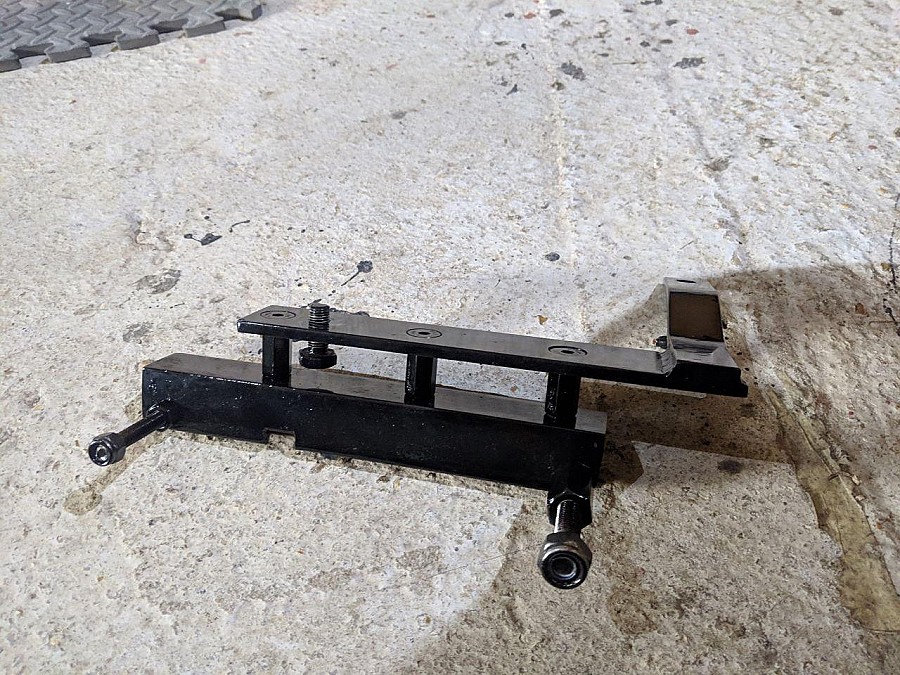 This bolts to the engine using the engine lifting mount and then onto the outside of the exhaust manifold. 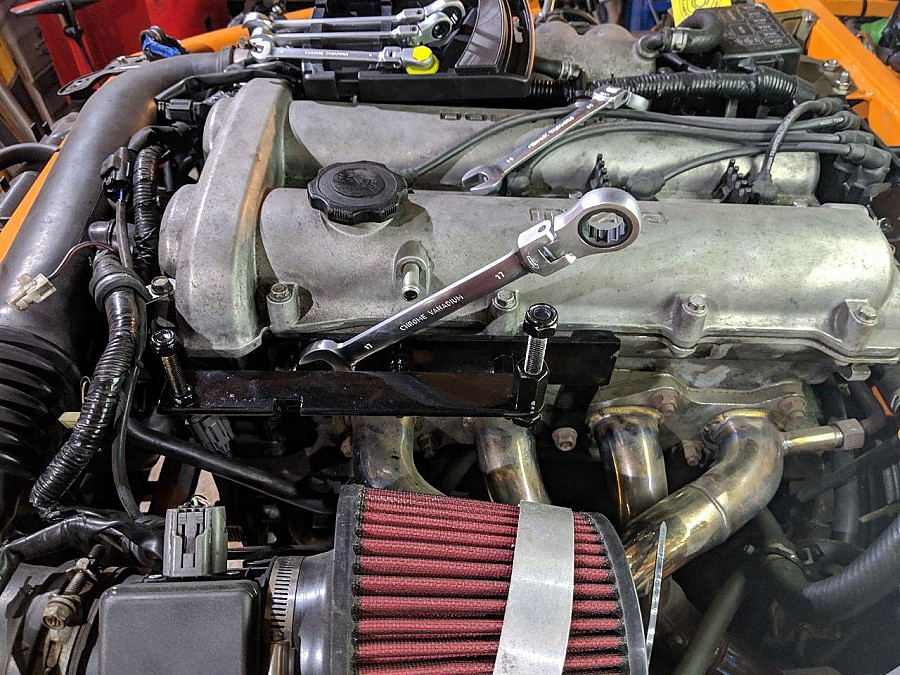 Next up are the inlet and outlet pipes: 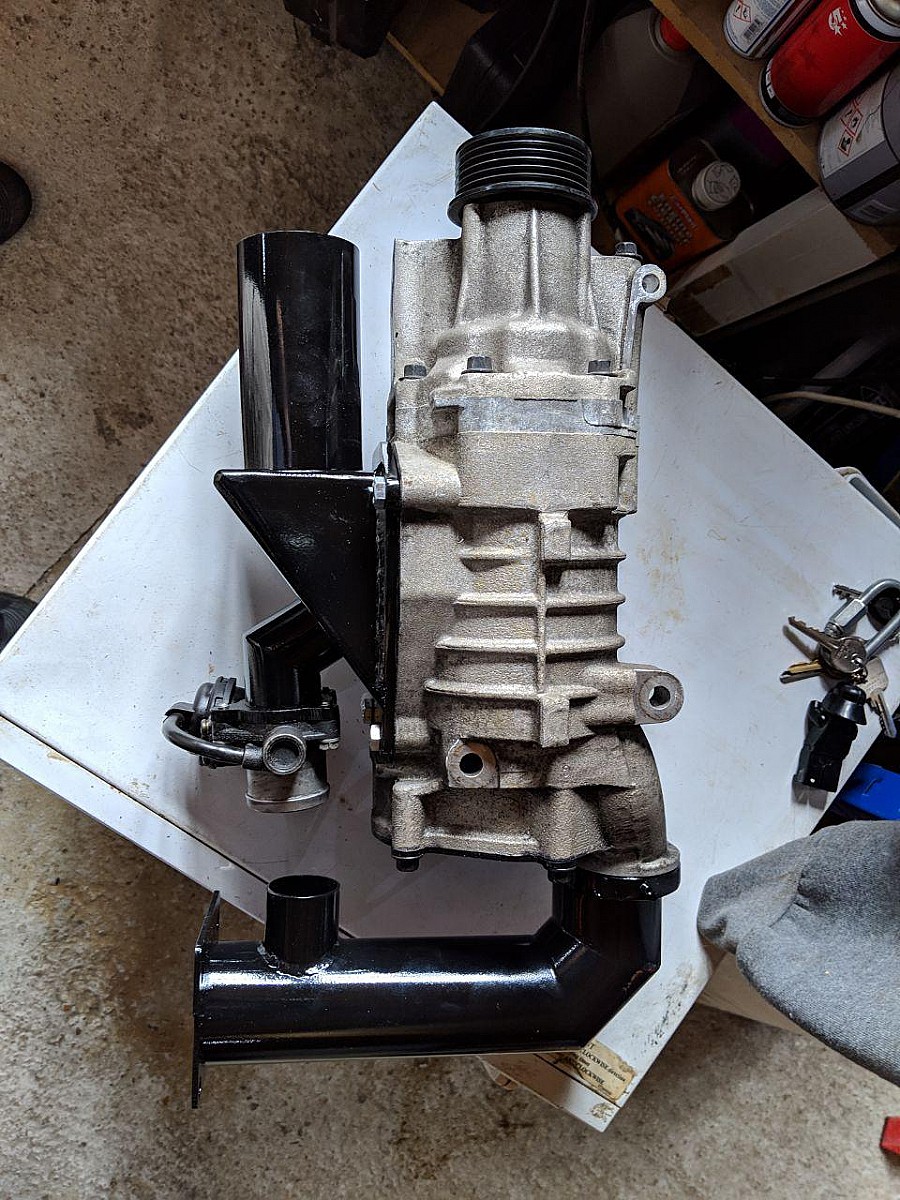 The ones shown above are designed to fit the stock MX5, We ended up with multiple iterations of these, making the inlet shorter and rotating the bypass, but, the basics are the Inlet pipe, which takes air from your secondary throttle body, splits it to the bypass and then attaches to the back of the M45 charger with a very specifically shaped flange. 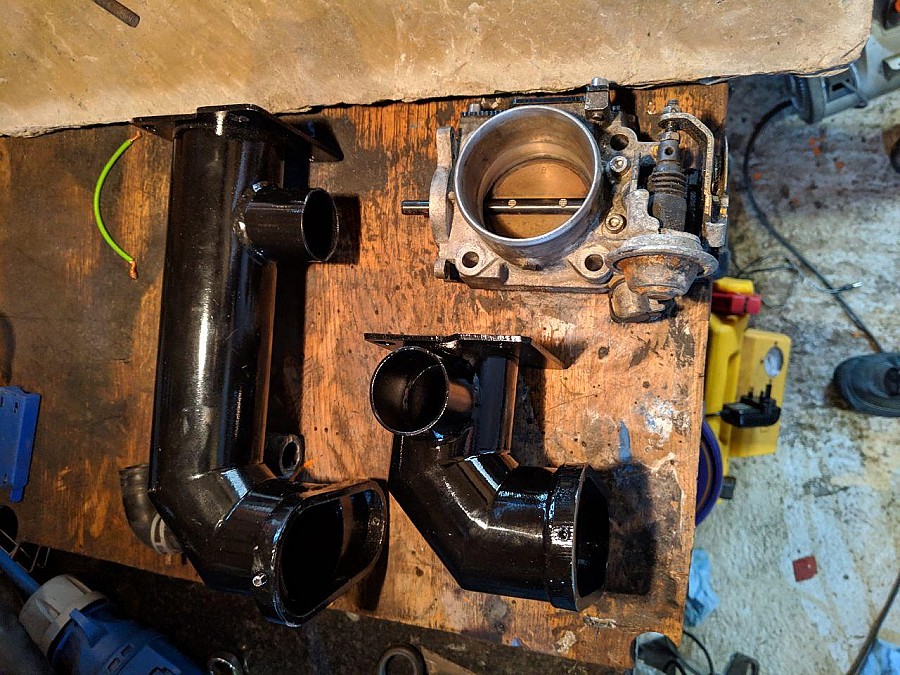 The Outlet bolts on where that “horn” was earlier, and makes it a straight outlet which you can add pipework to.

We don’t have a Power Steering Pump so we just used a shorter belt and made some brackets to hold everything. 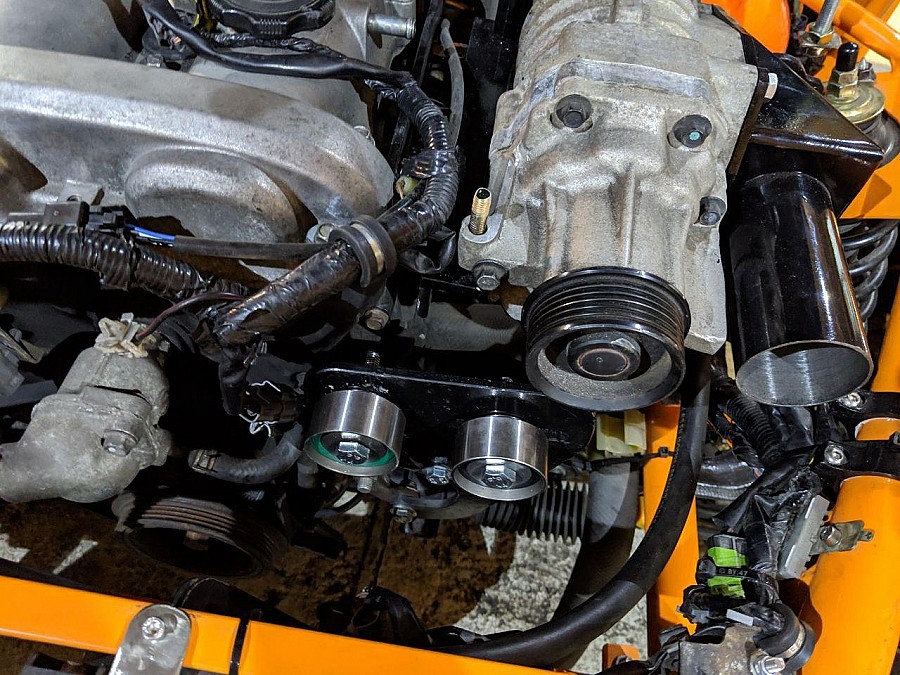 This mount allows you to fit two belt tensioners, in our case cambelt Idler pulleys taken from an MX5, bolted in with M12 bolts. The right hand pulley can be moved left to right to add tension to belts as needed.

Intercooler A lot of MX5 setups run a direct pipe from the Supercharger to the inlet without an intercooler. As the Supercharger is only putting out 7-8psi, it is possible to do without one, some people just install large pipes to give the air space to cool a little, others are installed intercoolers flat over the engine bay with some inlets on the bonnet and some kits allow the charger to be mounted in front of the radiator.

In the stock MX5, kits exist to mount the new intercooler in front of the existing radiator, but because of space, we had to make our own mounts and pipework, which was a pain in the ar…..

Cold air into the engine is best though as it means the air is more condensed meaning more power. , Since ours is driven mostly when its sunny, we assumed the air going in would need as much help as it could get. Fortunately standard size intercoolers are available readily, and so we measured up space and found what would fit: 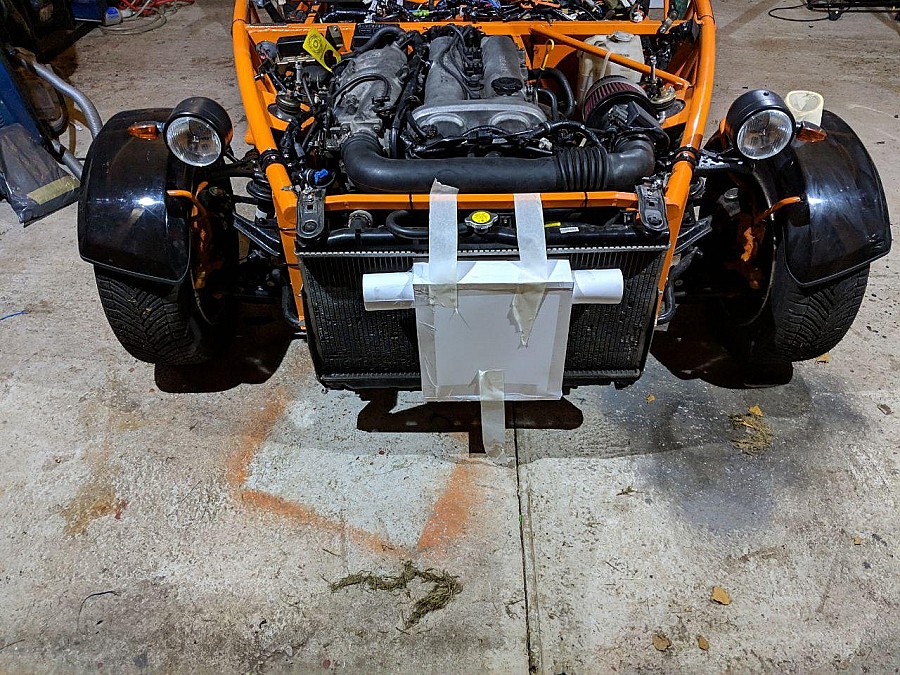 And then made mounts to fit that, ensuring it did not touch the existing radiator and that it was able to clear the bonnet. 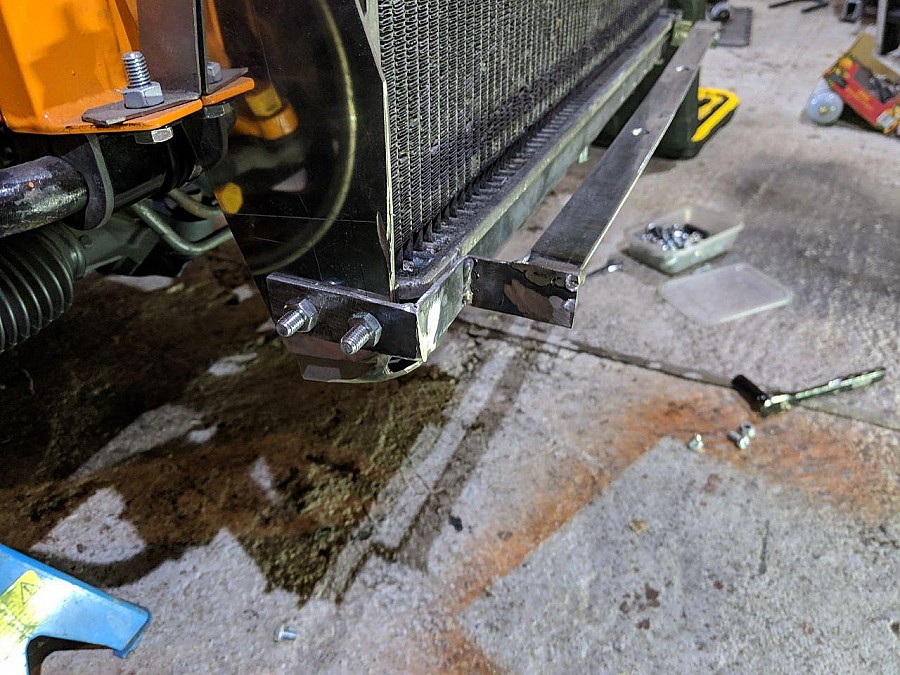 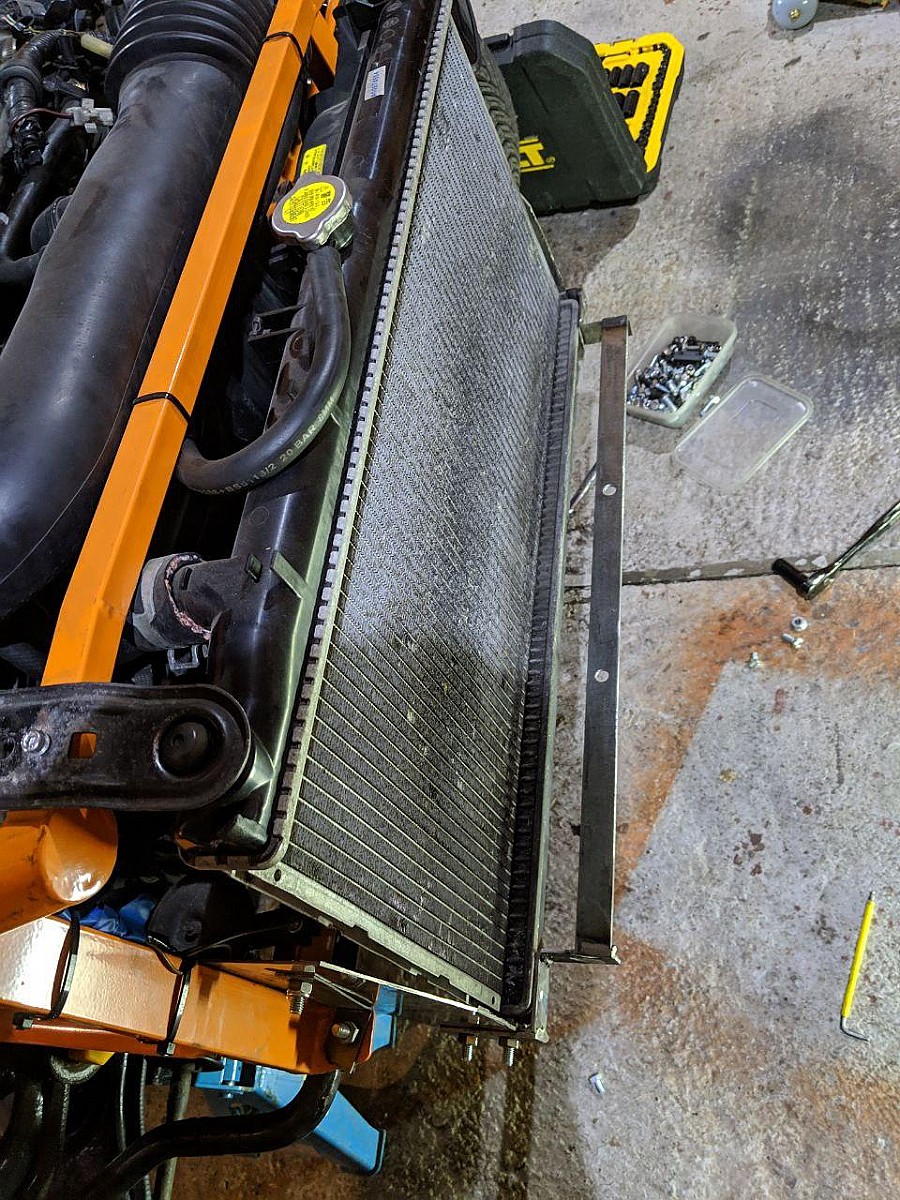 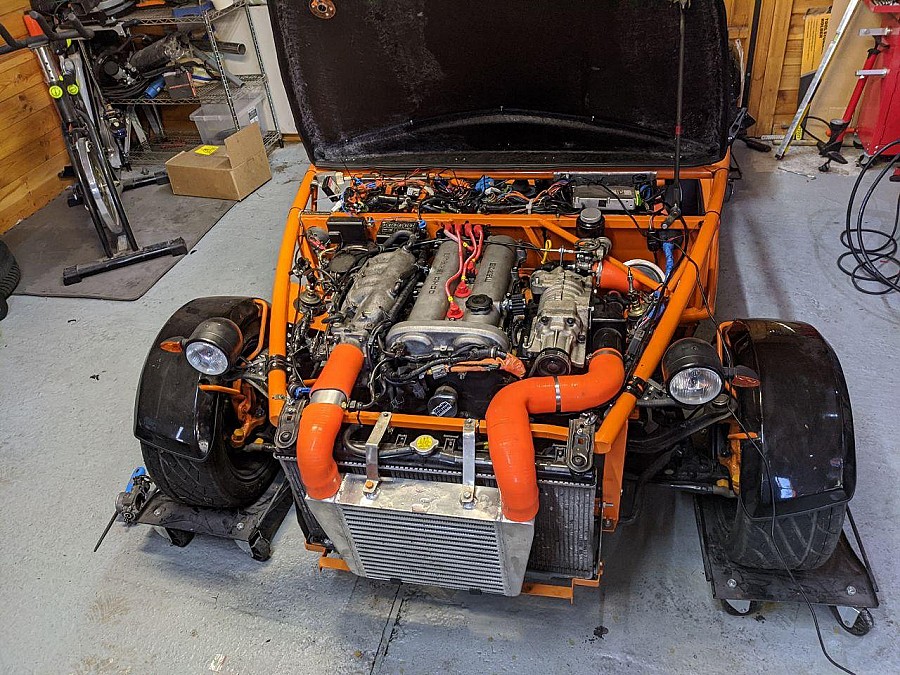 Please ignore that the entry and exit ports moved from the side, to the top of intercooler. It turns out that our chunky 2.5 inch pipework didn’t fit when they were side mounted.

Superchargers are attached to the engine’s belt system. Even when the engine is idle, the supercharger is receiving drive and compressing any air which enters into the system. One way to control this is to stop the air getting in. With no air in, the charger cannot compress it and the system will not build up pressure in the intercooler, instead it will just re-circulate the air in the system. To stop air getting in, we installed a second throttle body attached by a cable to the original. This throttle body was taken from a 1.6 Mk2 MX5, I’m not sure why, other than that the kit we brought with the pipework was setup to do that. 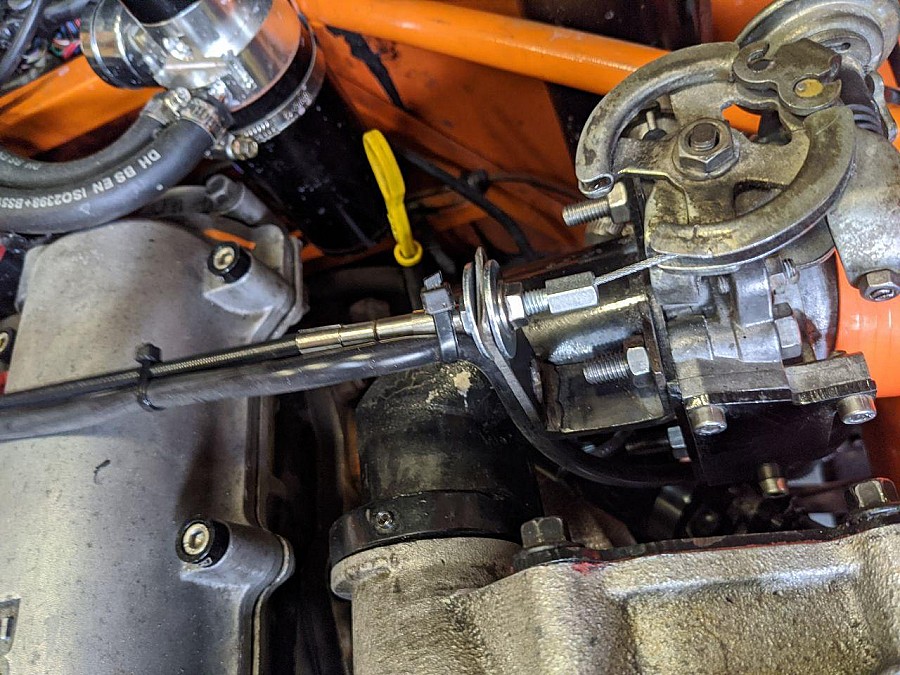 The Supercharger does need some modification, notably a small plate which seals up the Throttle body bypasses (which are used to allow air in when the car is at idle) This did actually come with the kit we brought, but small metal plates are easy to make. 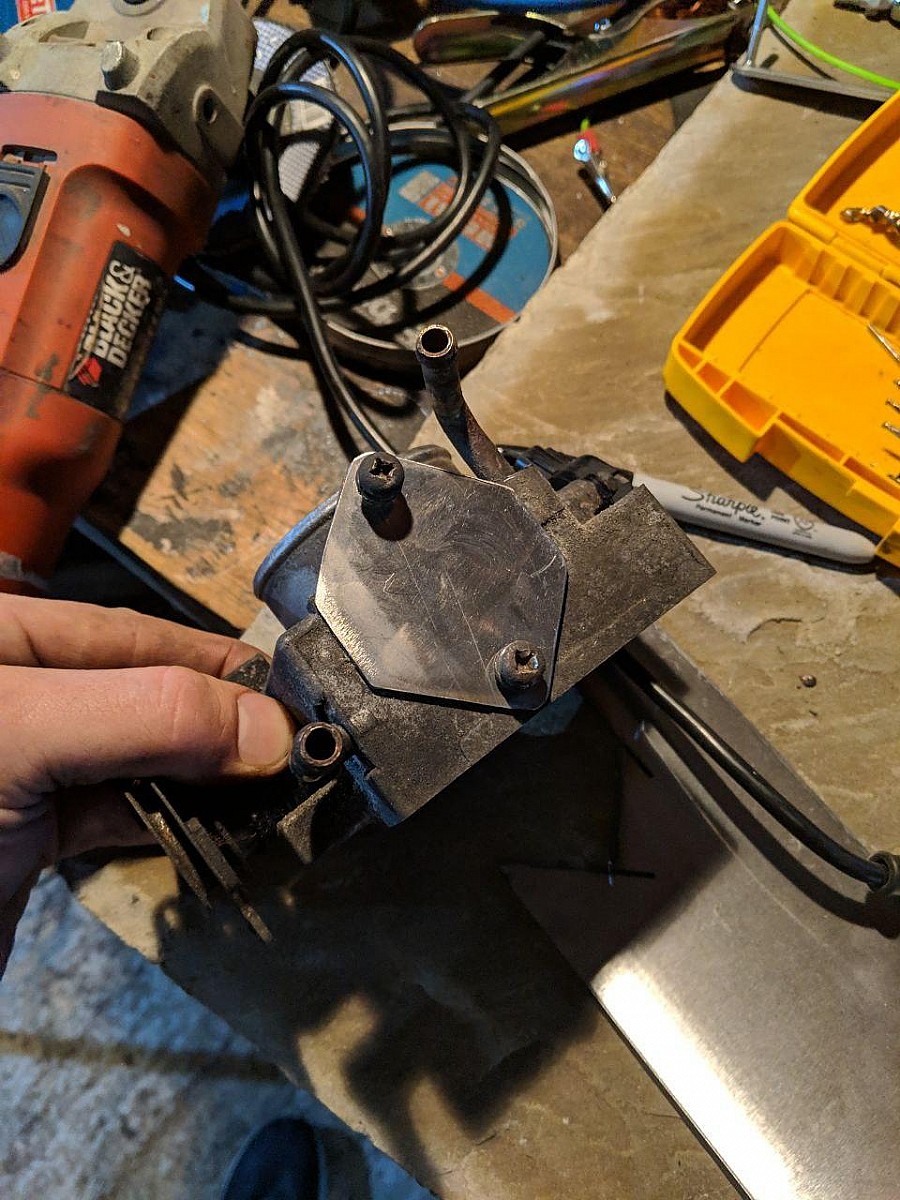 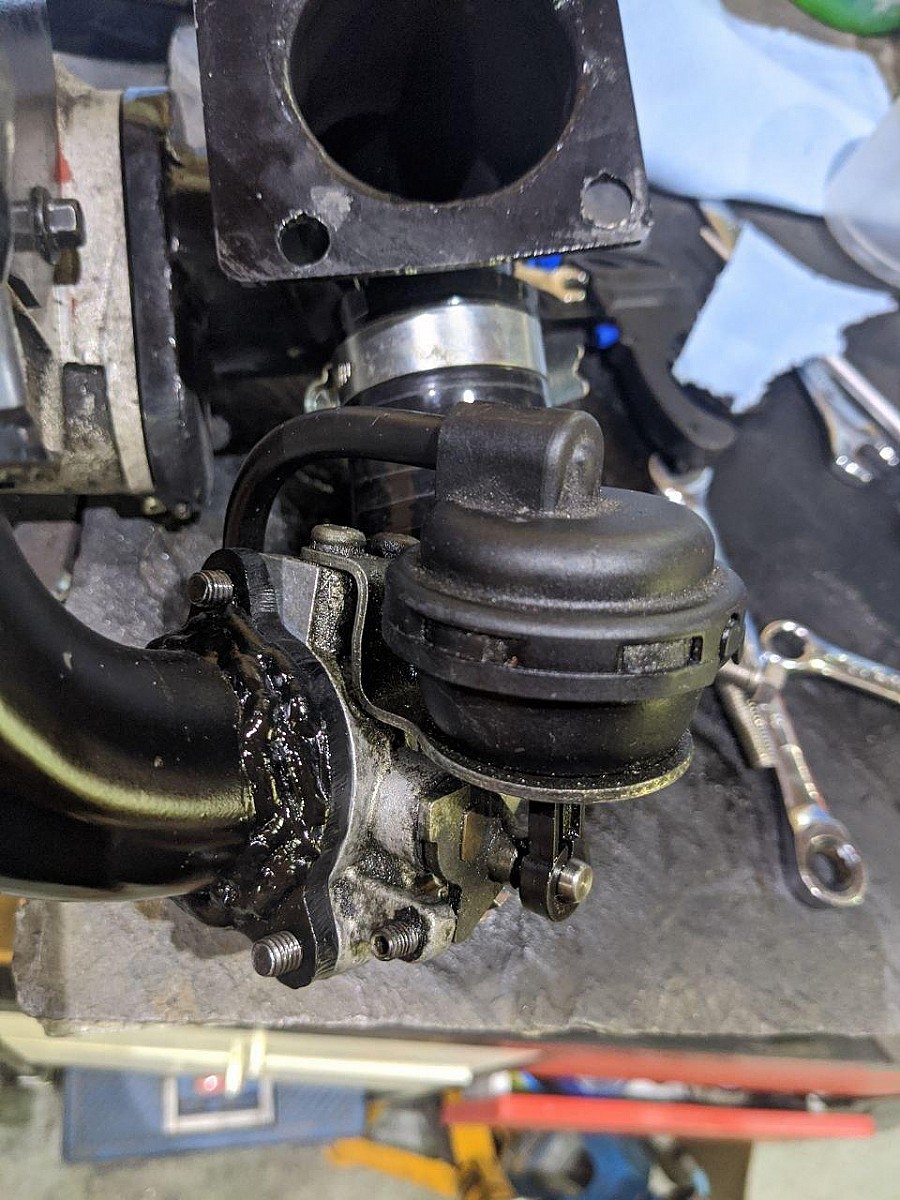 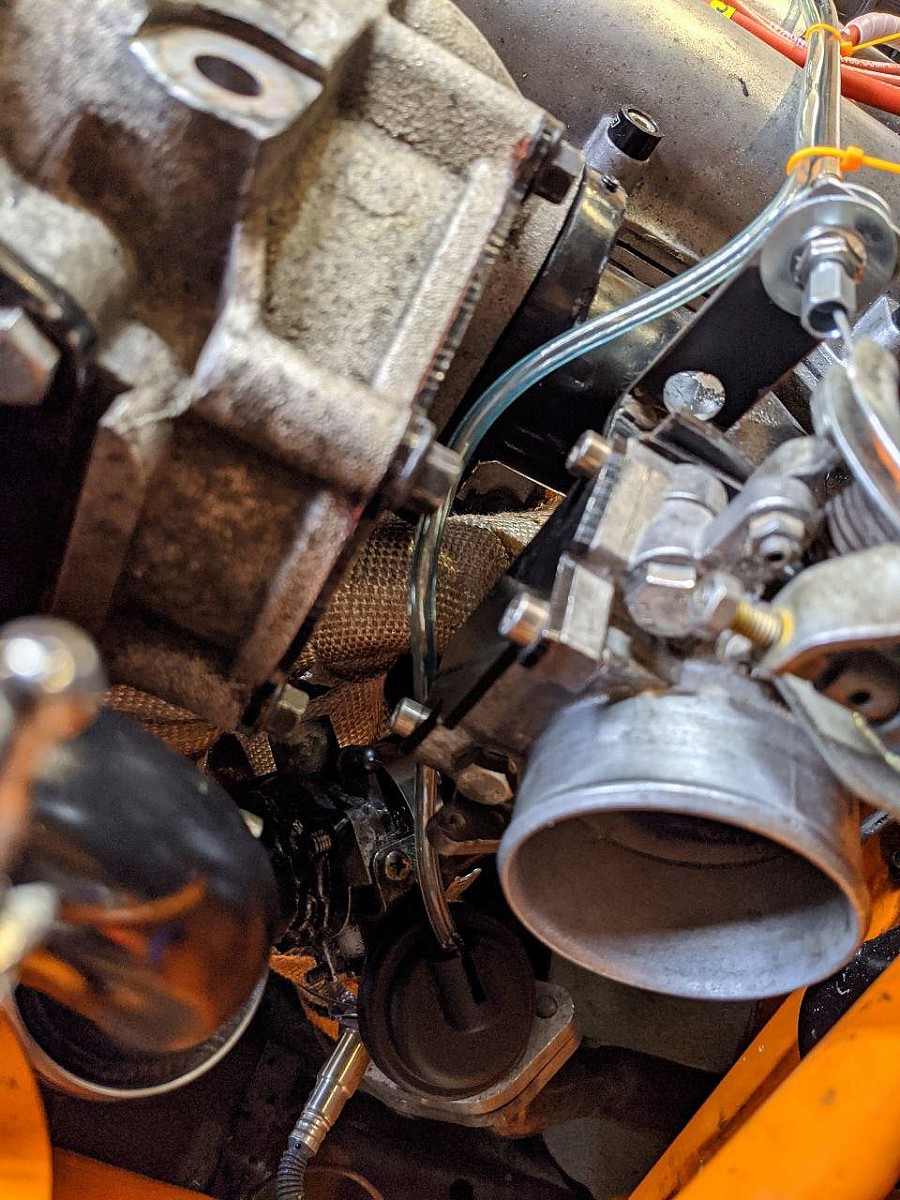 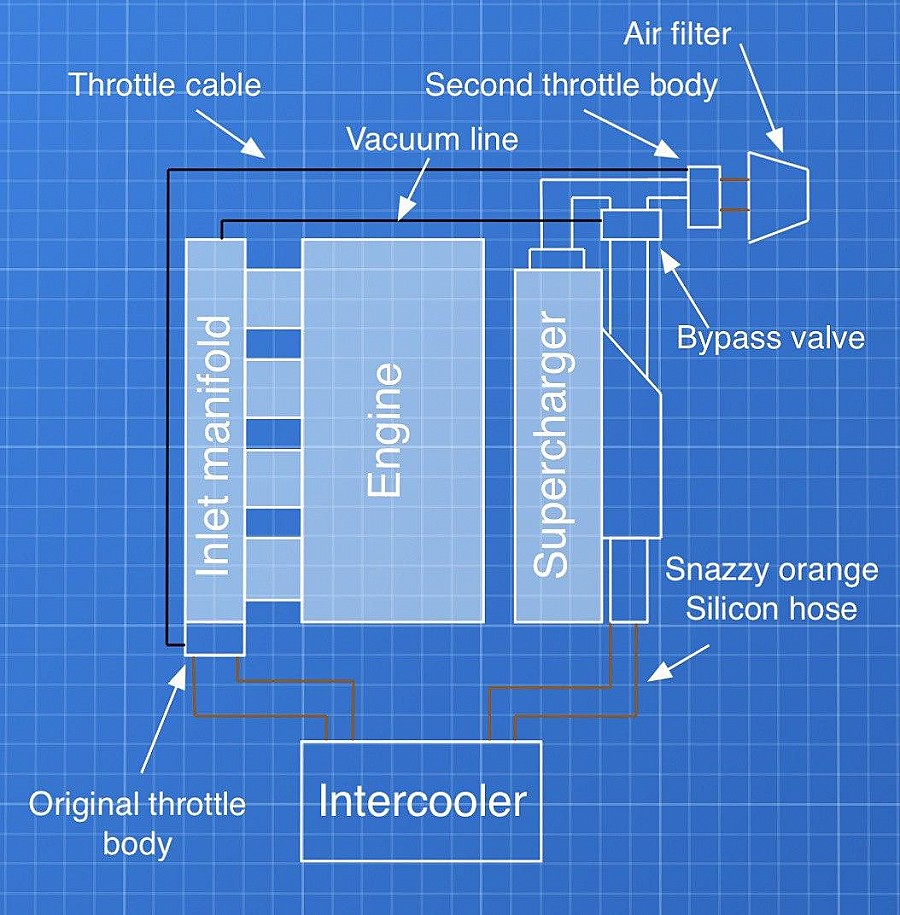 This is the diagram of our final setup, which we have managed to get working, running, not screaming like a banshee and able to accelerate without cutting out. Thats the hardware sorted at least. The ECU, tune and getting the car started is a bit more complex. And we are still sort of getting used to that bit…