It’s safe to say Ermy is “done”. She’s up, running, supercharged and happy. Bar a tune and the fact that her wiring looks like a birds nest. But everything works and she drives (worryingly rapidly) and with much rear wheel slippage over the light back end. So thats good. 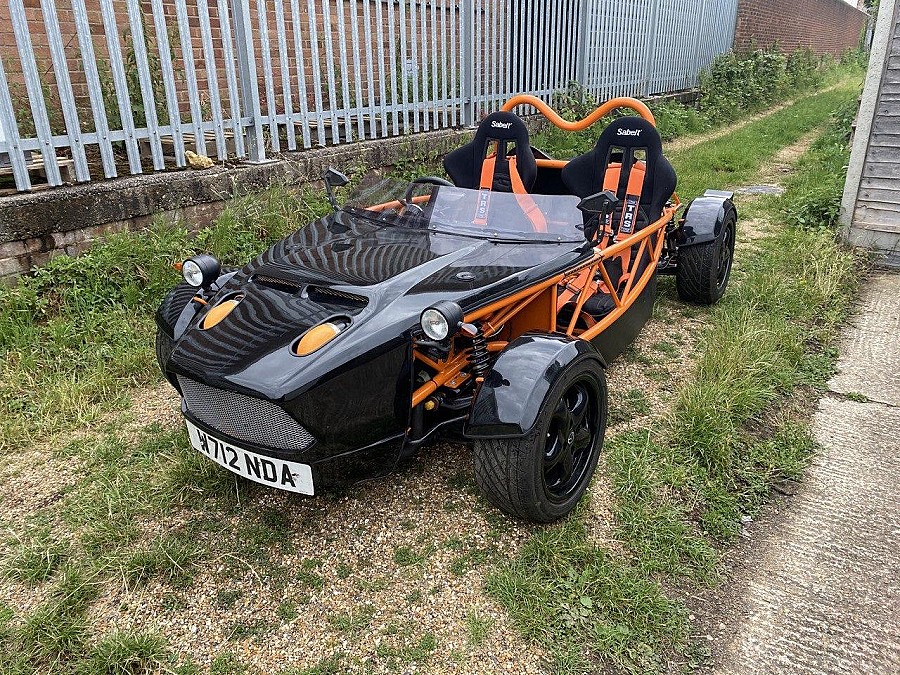 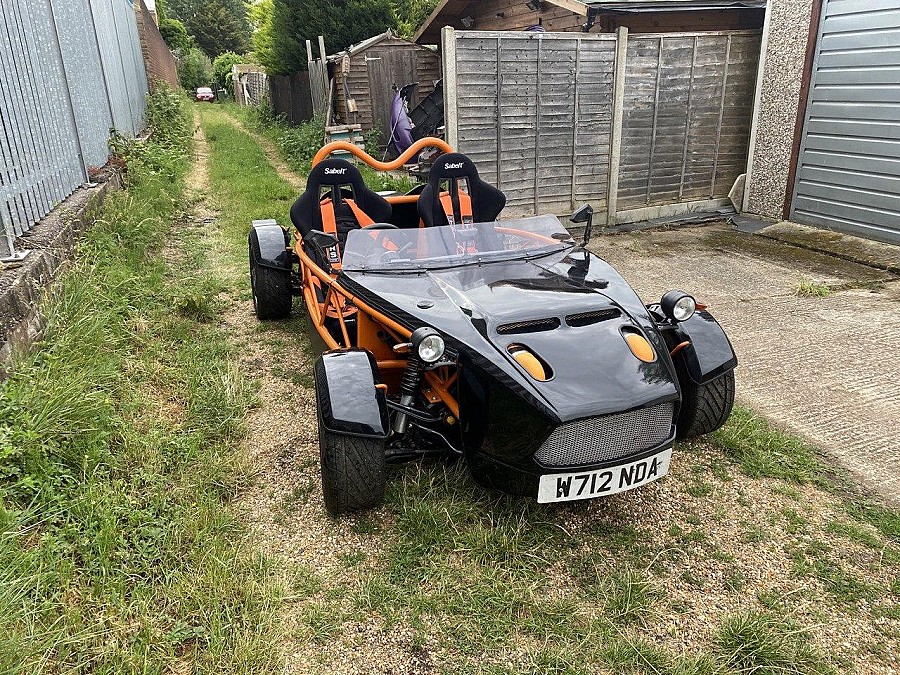 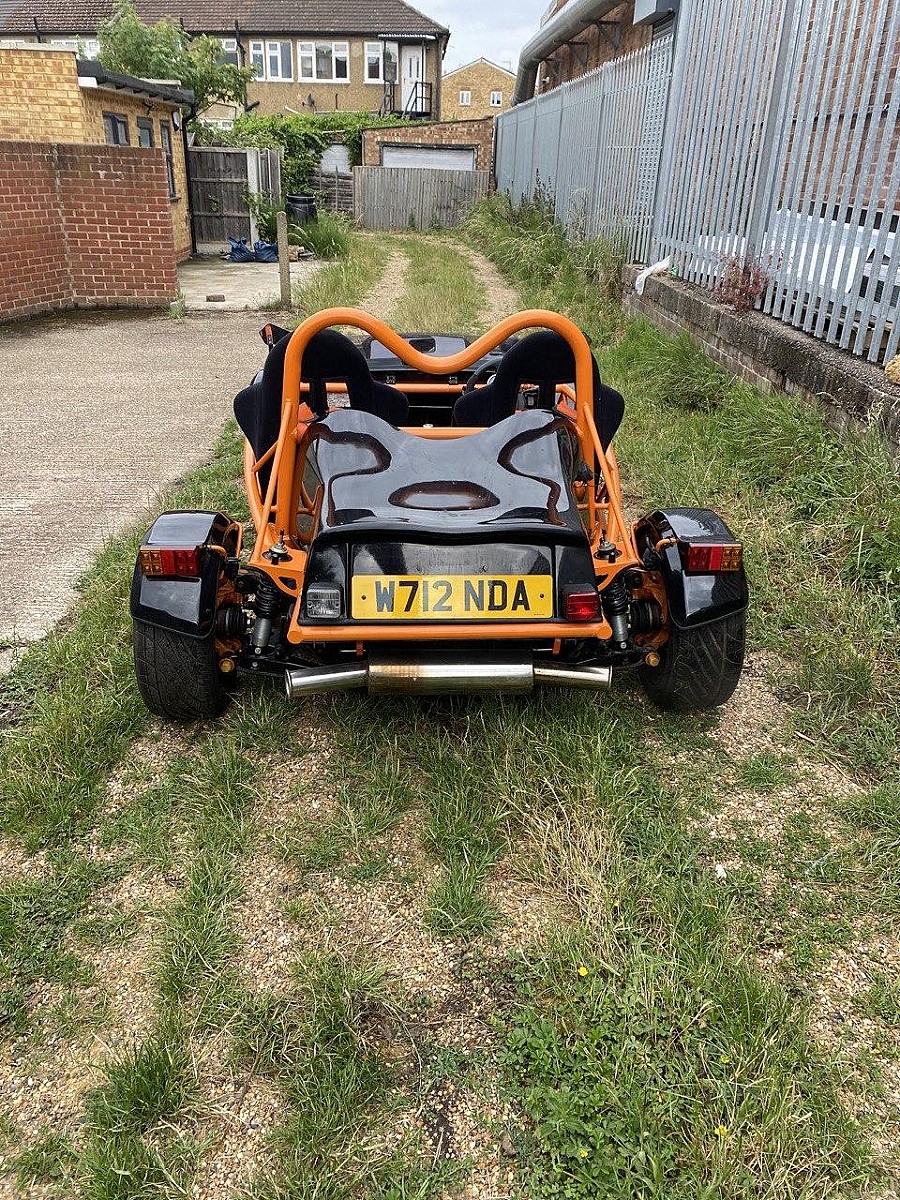 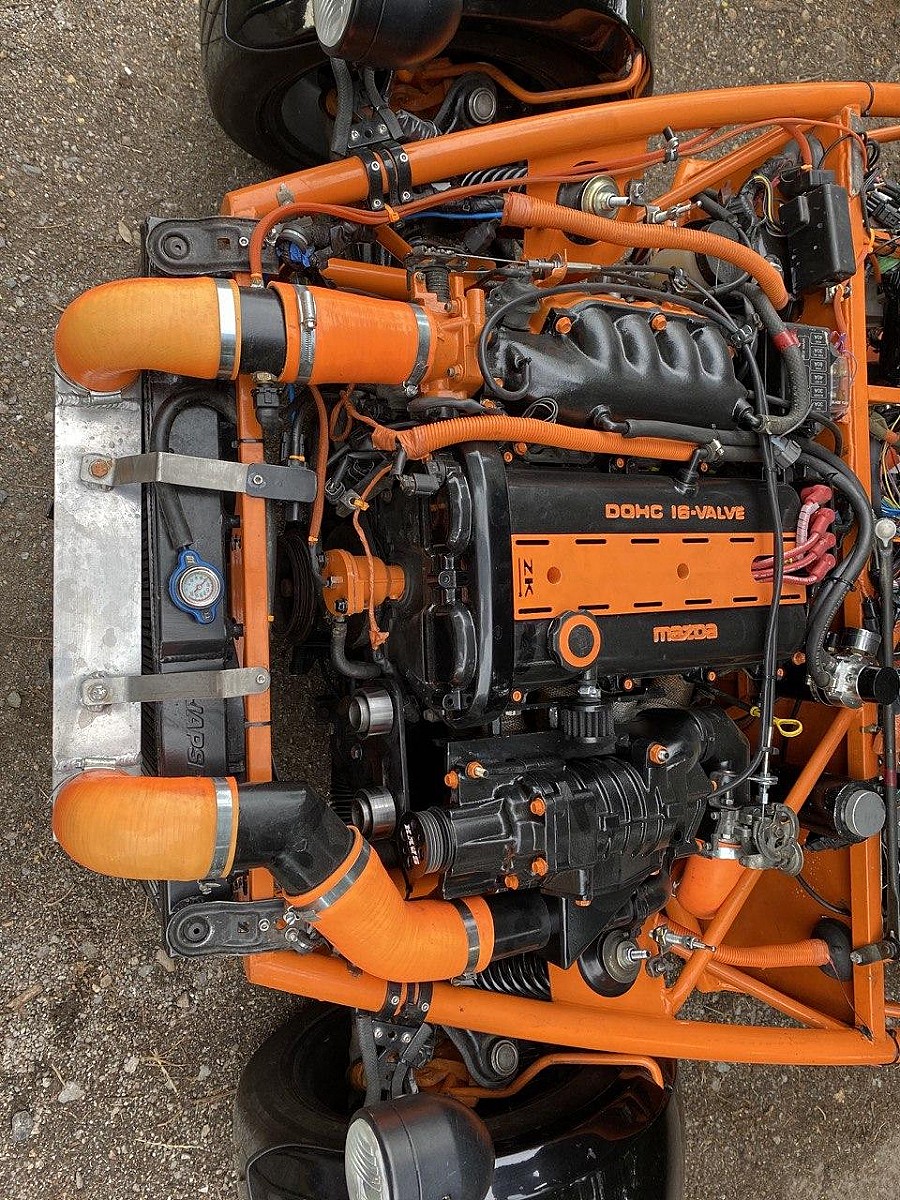 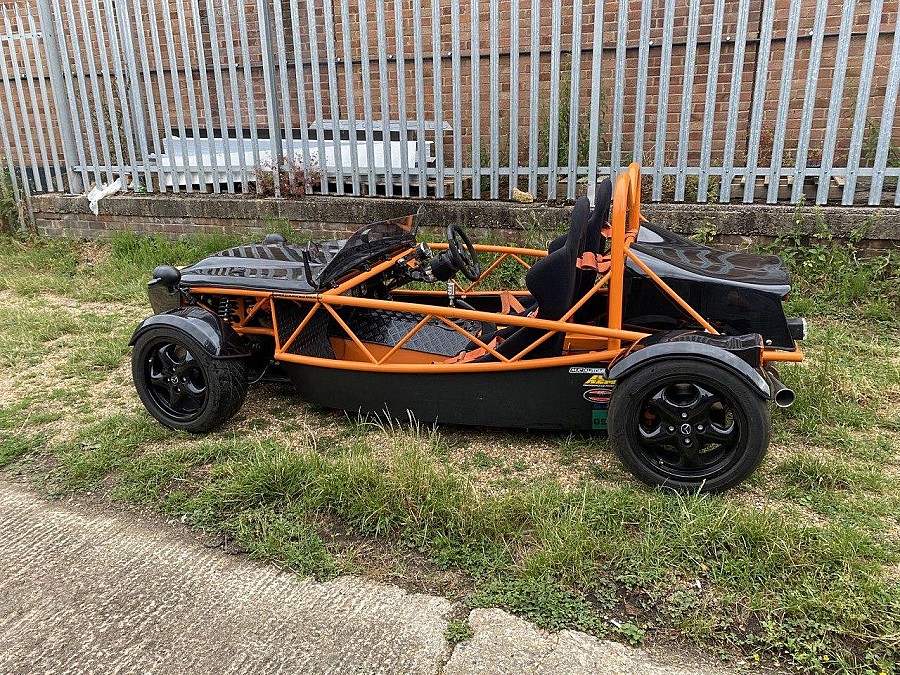 So the garage is empty and I’m bored and were in lockdown. Time for another build then.

A friend of mine has a Haynes Locost Roadster frame which he moved into our garage store it for a few months:

Contrary to what you might think though, this is not a build project of someone else’s abandoned project. Its even weirder. It turns out said friend had purchased a frame ready cut in tubular form, and then realised he had insufficient space/time to weld a frame together so he purchased a second ready made frame.

So now we he had a series of metal box section cut (Roughly) to the spec found in the 2007 Chris Gibbs book, “Build Your own Sports car”. I say roughly, because this frame was modified by Talon Motorsports to allow it to fit an MX5. And we know how to dismantle and MX5.

So here is our donor car, which we named the Purple Monstrosity: 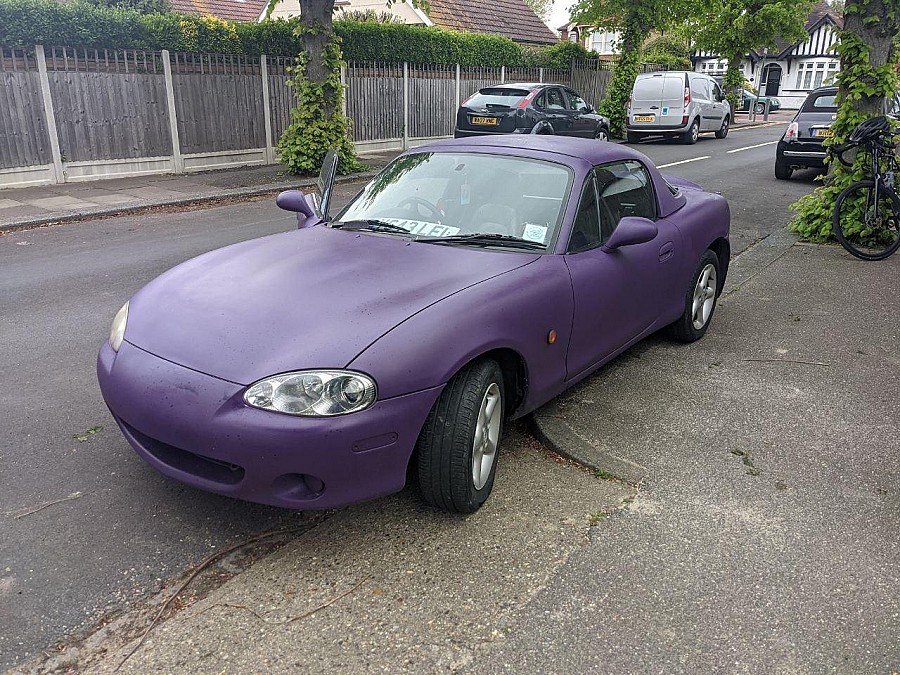 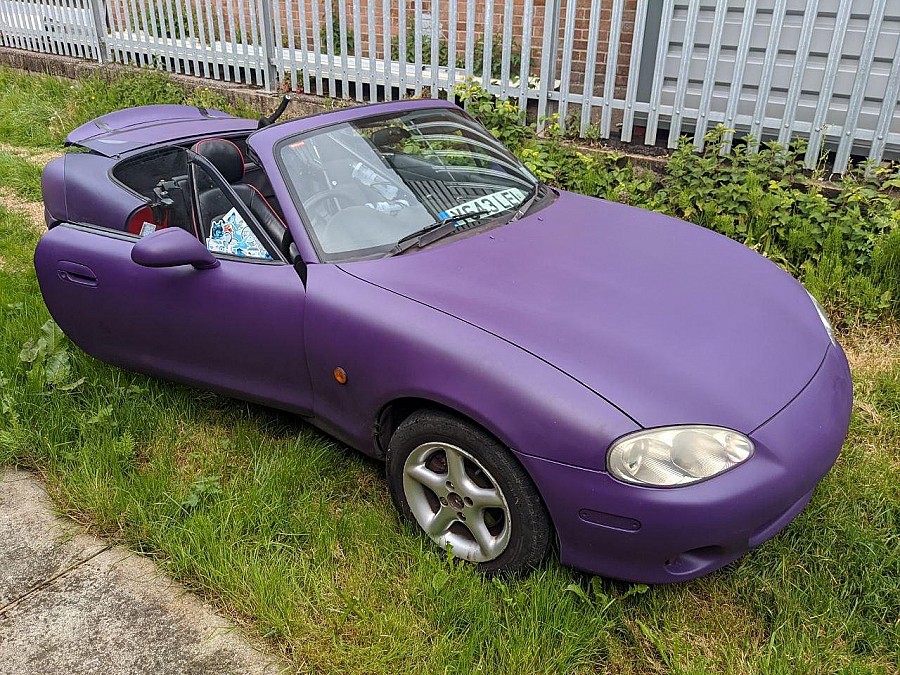 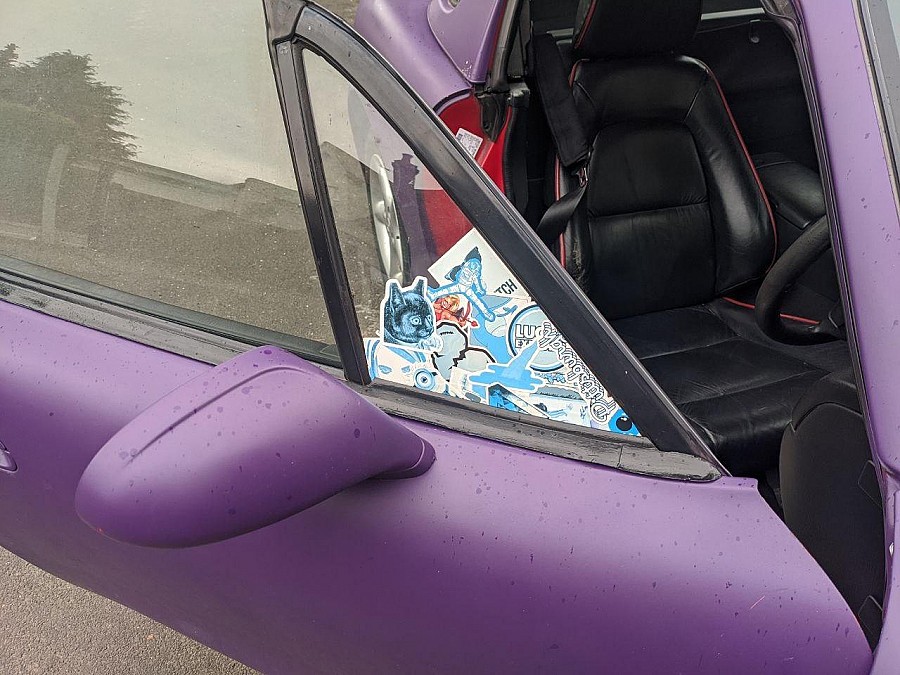 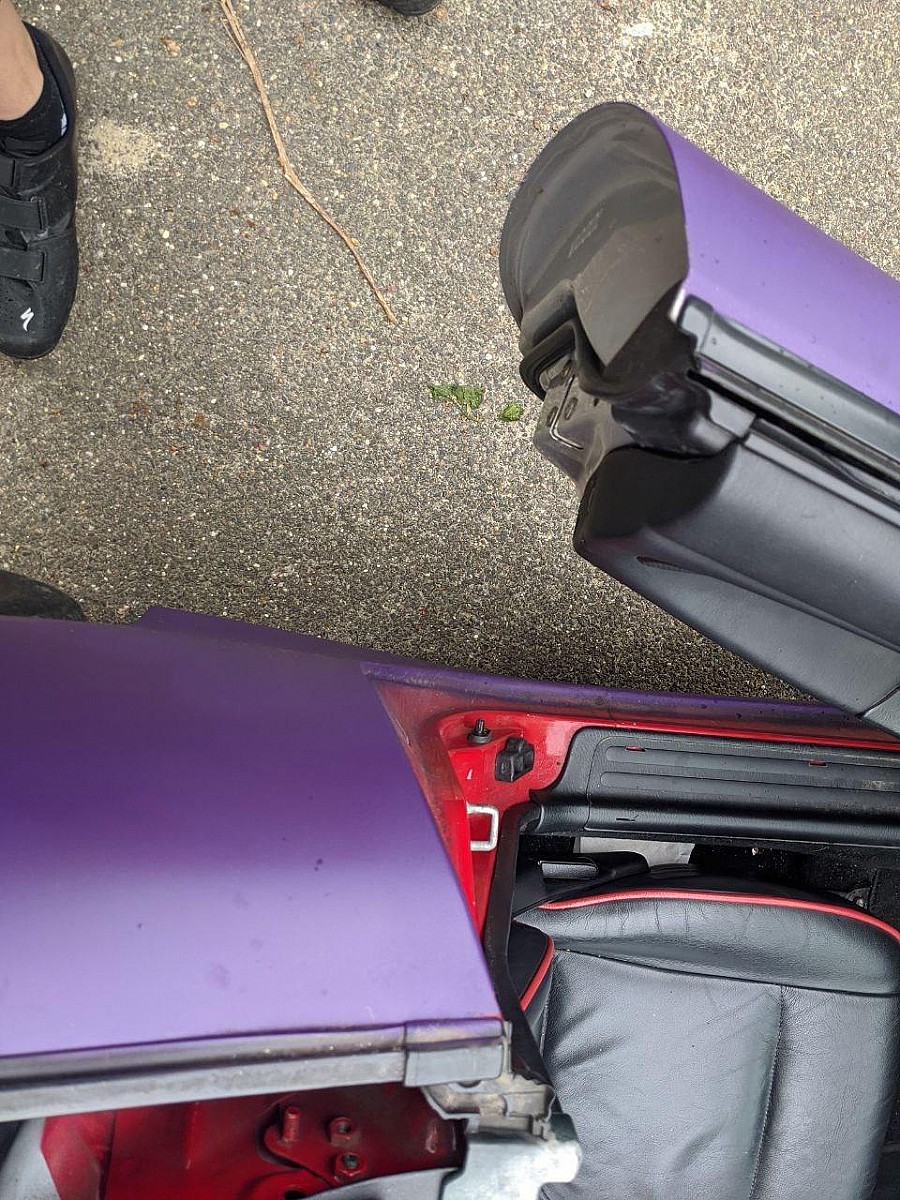 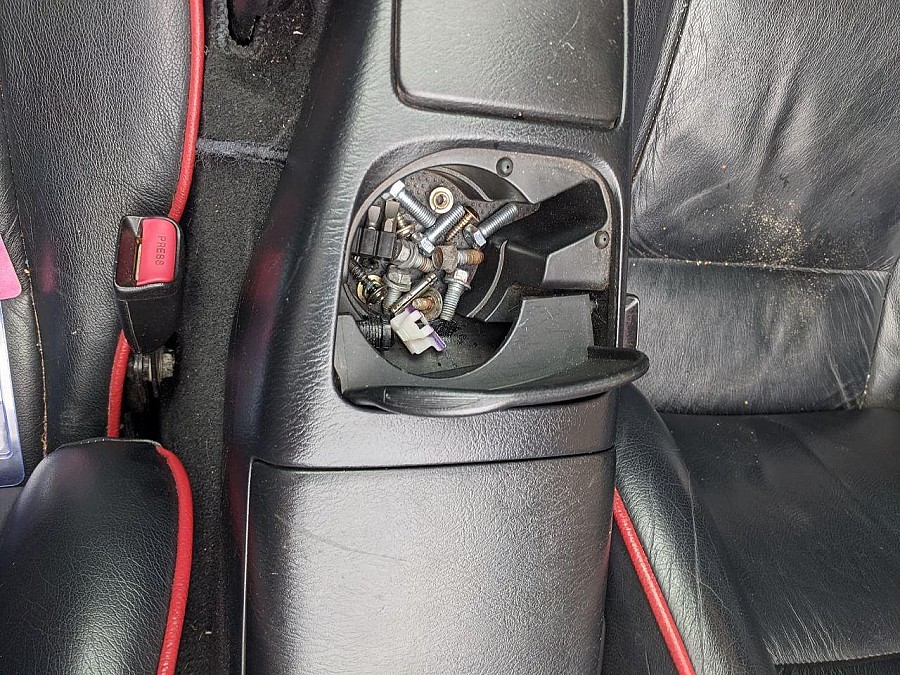 Rattle canned purple by its former owner because the red paint was faded, this turned out to be a fairly solid chassis with a pair of ruined rear brake callipers, no anti-roll bad to speak of, on 4 out of 5 fan blades and no roof. Oh and a lot of the panels were suspiciously silver, such as the insides of the doors. The previous owner was seeking to sell the hard top separately and we don’t need a roof so, this was a bargain. We’re not sure why it had a centre console full of bolts, but it came with a “Covid MOT”, an MOT that had been extended because test centres were closed. It was also £500 from Facebook Marketplace. A perfect donor car really, purchase after I cycled 30 miles, insured for an hour with Cuvva and driven home with the boot duct taped down to hold my bike wheels in.

It came apart in the traditional manner: 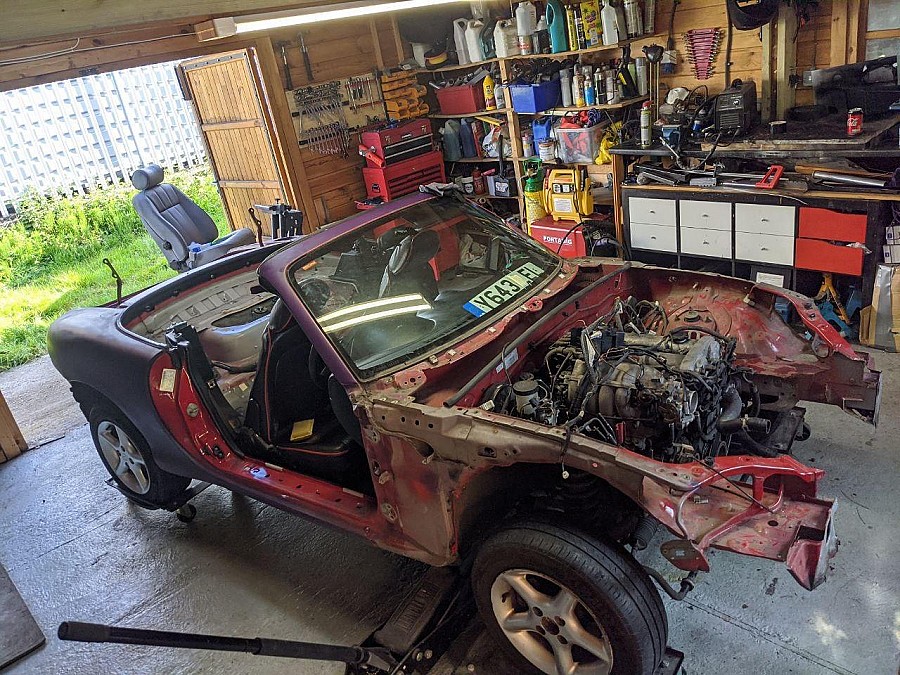 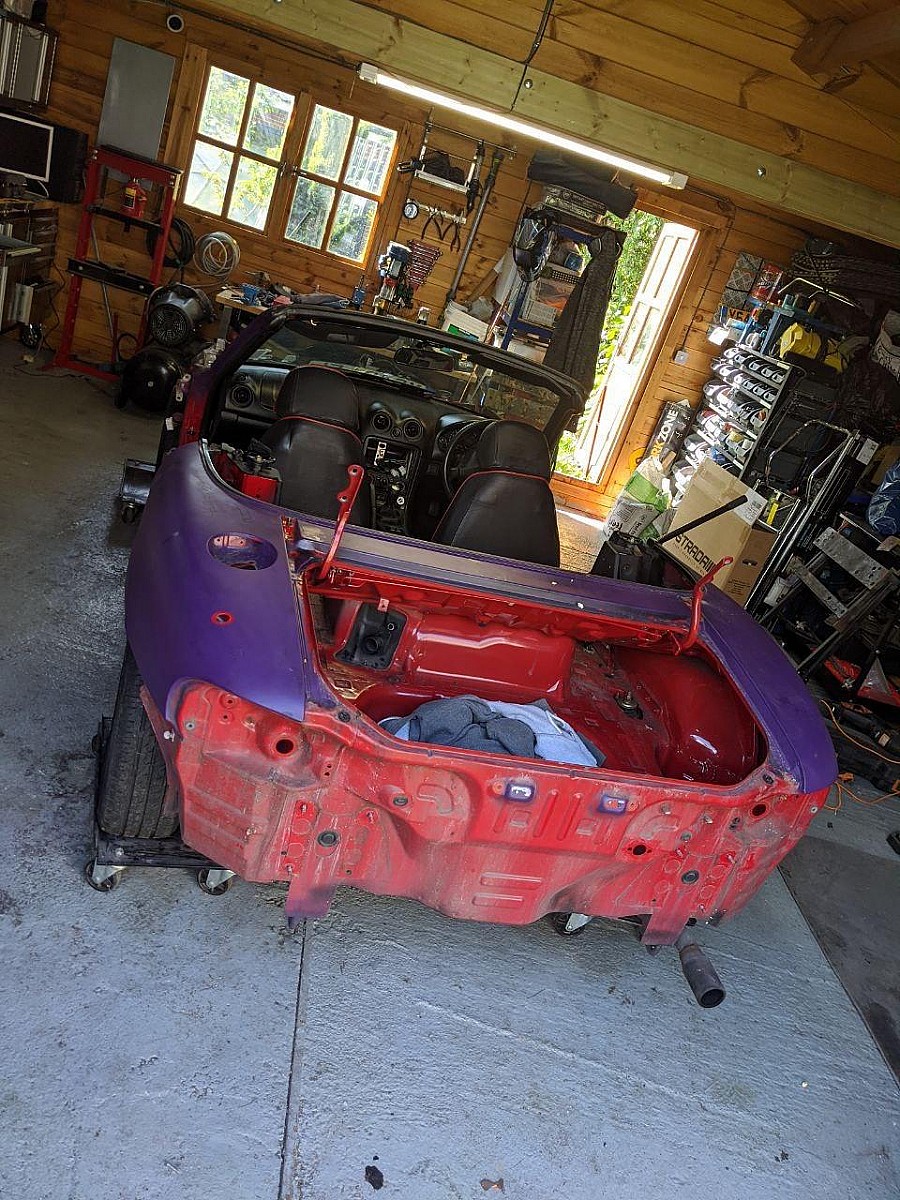 Remove enough of the frame bumper and crash structures to lift the tub off, removing everything you can that might be saleable: 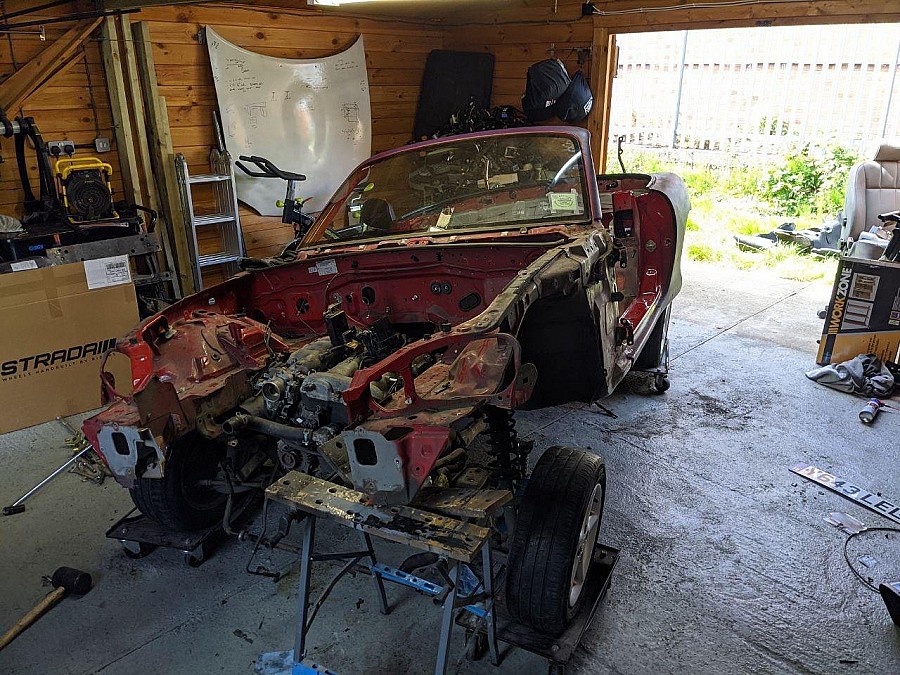 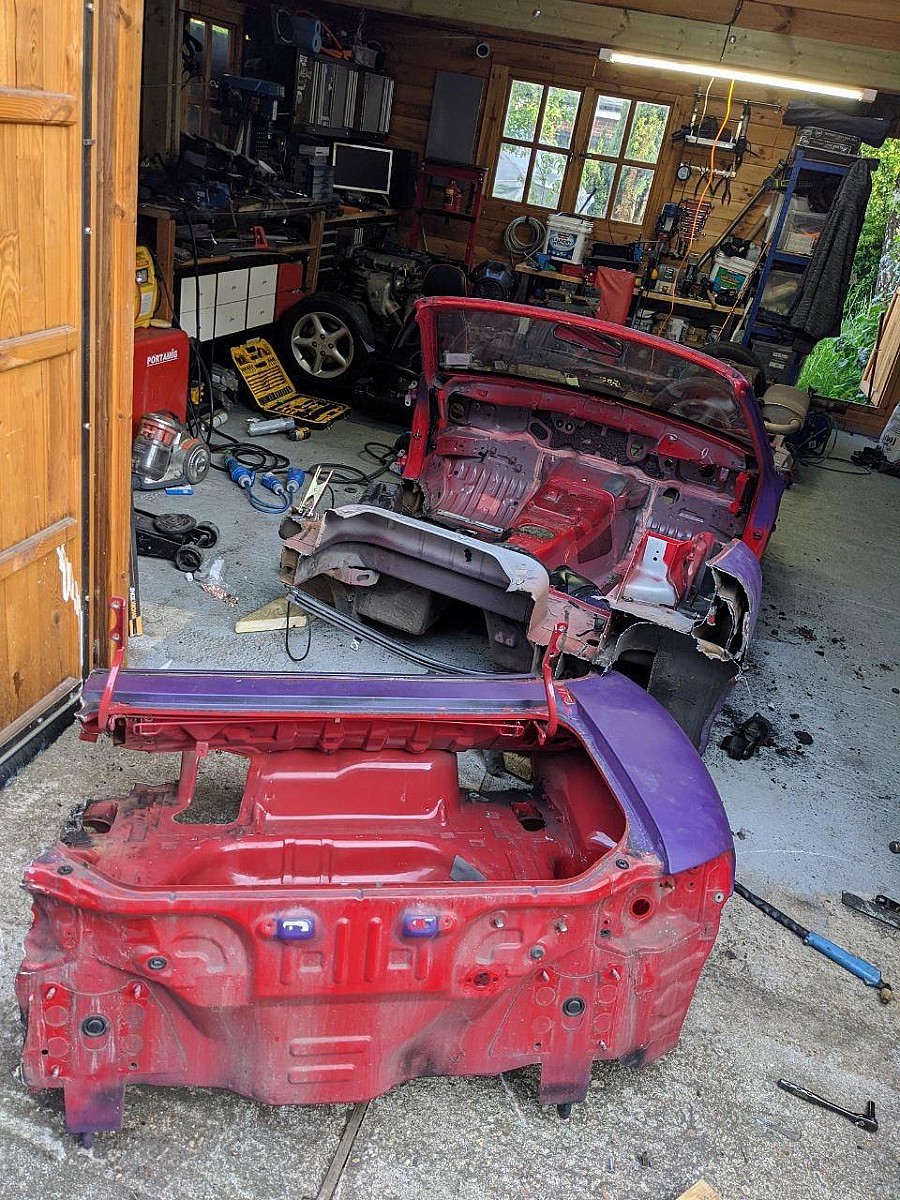 The tub was cut into chunks which earned us a massive £48 at the local scrappy, who declared it to be scrap iron so basically worthless. 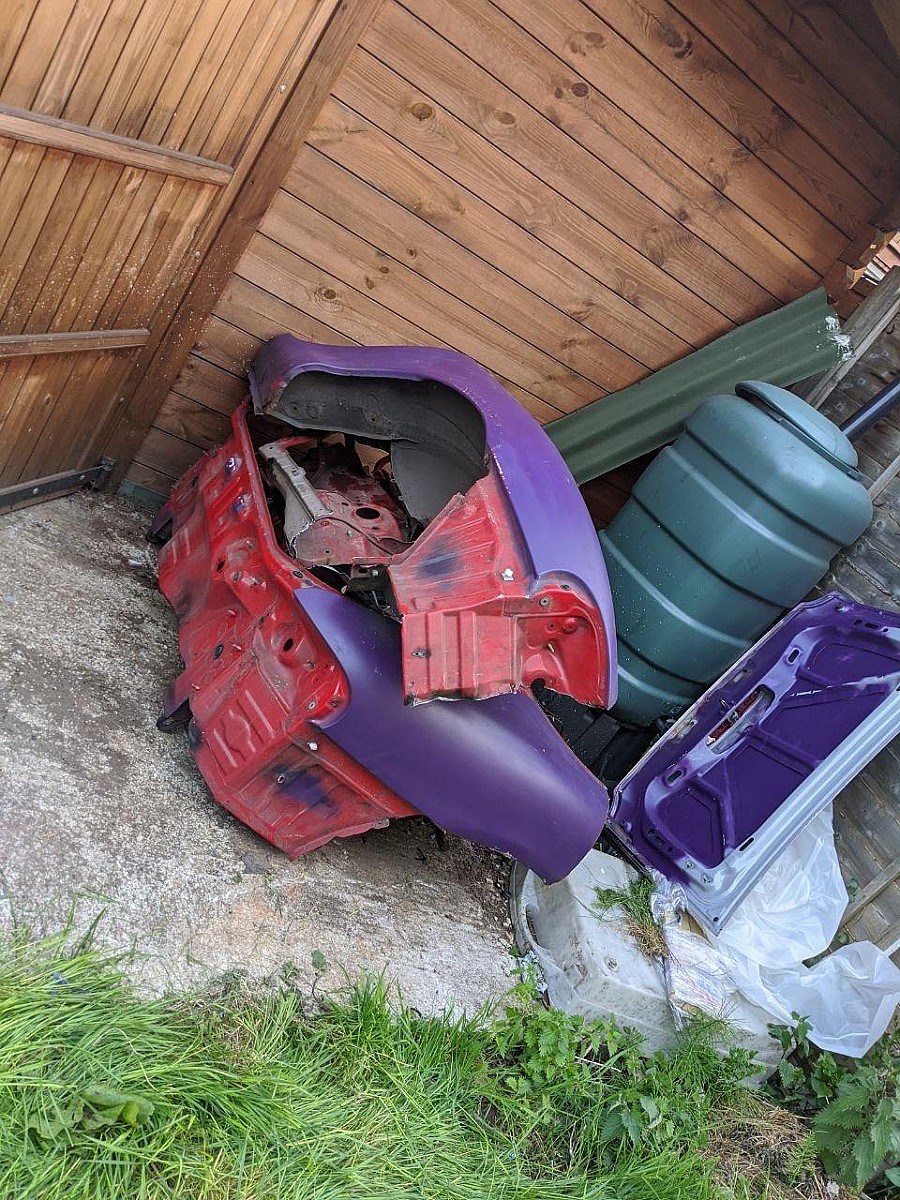 The result was the same sort of skate we had when we started building Ermy. 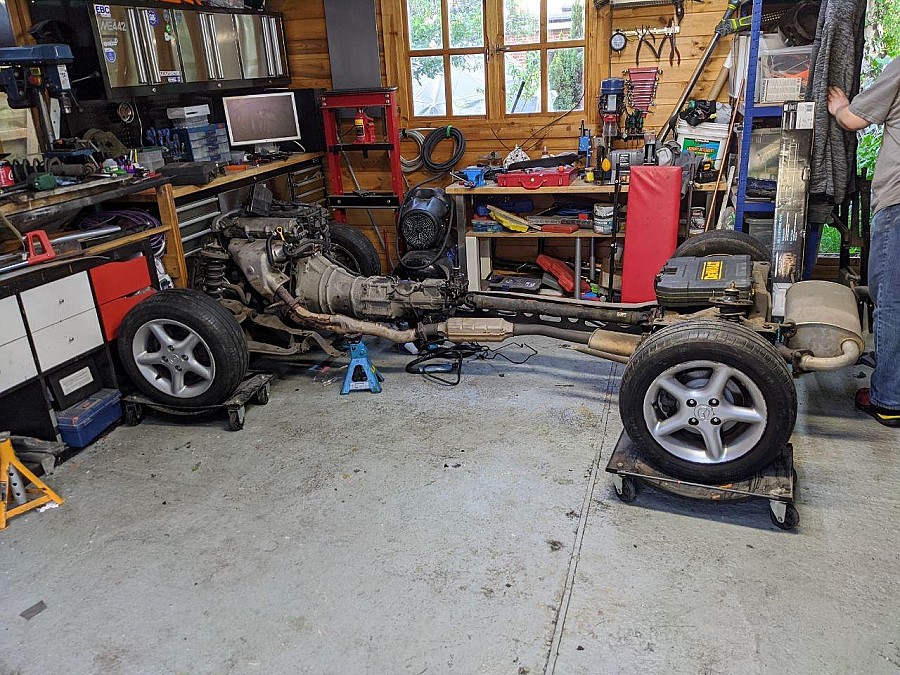 Indeed here she is eyeing up her new friend: 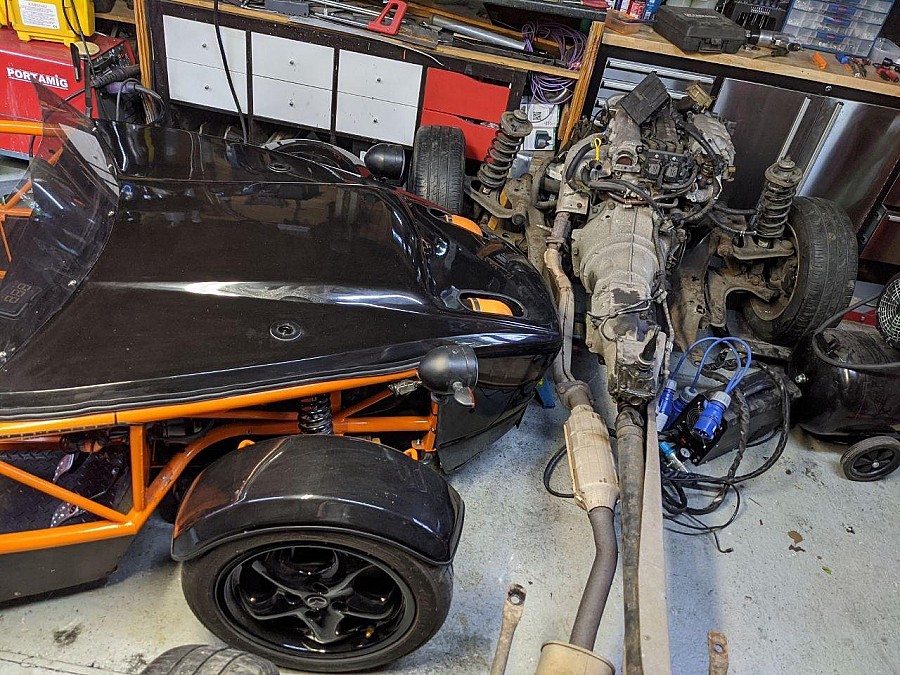 So here we are, we now have a pile of box section and the important remnants of an MX5. Let the socially distanced fun begin.