Perhaps an unpopular opinion amongst kit car builders. but it is sometimes perfectly acceptable to drive a well maintained car that someone else has taken the time to design, build, setup and look after. Particularly if you are planning to slide it sideways around a frozen lake.

In this case, the frozen lake is in Arjeplog, Sweden and is owned by Jaguar Landrover. The site is primarily used by the firm to test vehicle handling on slippery conditions and with temperatures here getting as low as -45c, the frozen lakes and frosty roads are home to Volkswagen, Audi, Ford and a whole pile of other European manufacturers testing out their latest cars.

And you can see why.

Even the Un-curated lakes here are frozen pretty solid, but those which have been specially “grown” (They drill holes in the ice to allow water to flood to the top, which then freezes. Wash, rinse and repeat until your ice is 70-90cm thick and can support a snow plough) offer a massive expanse of fresh ice which can be used to test out DSC and ABS systems, with the advantage of nothing too hard to crash into if you do it wrong. 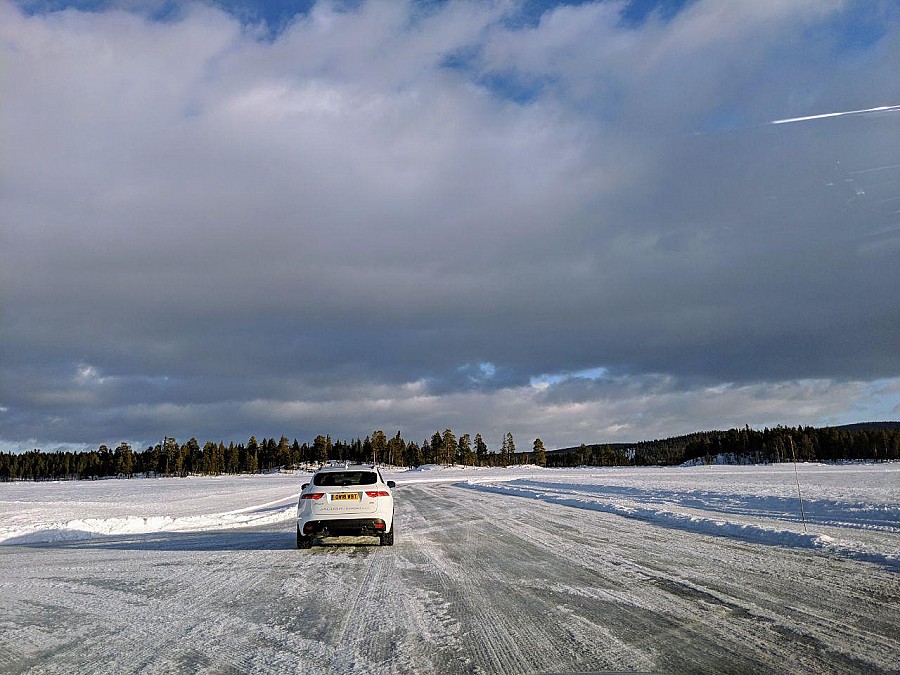 Which you probably will, because going sidways is actively encouraged here. 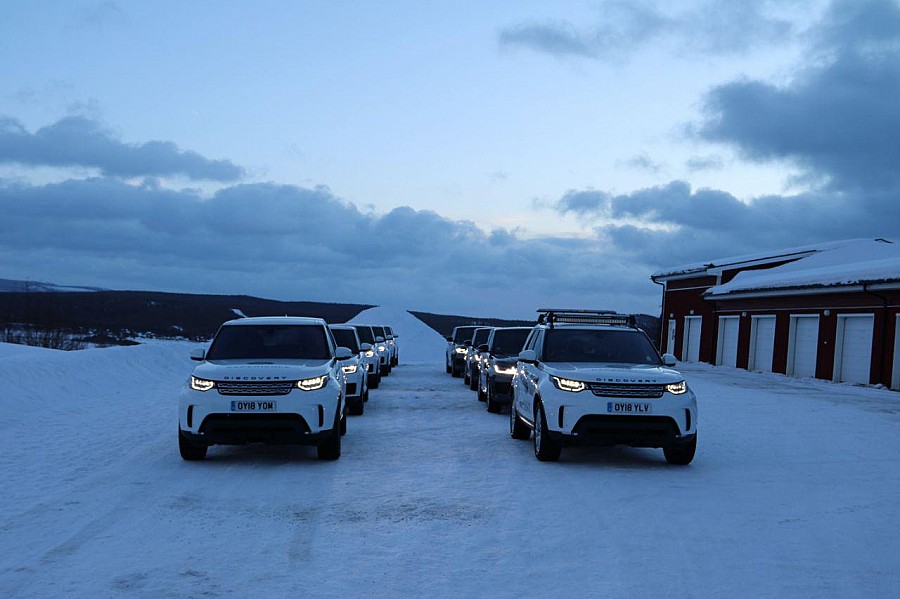 Arranged by https://www.029-travel.com/ in Germany, who look after all of Jaguars heavily curated adventures, we were on the most basic of tours. More advanced tours and driving courses are available for those who are used to driving on the slippery stuff. The tour price includes transfers from the airport, food and 3 nights stay in the hotel and so far a fair chunk of wine if that is your thing. 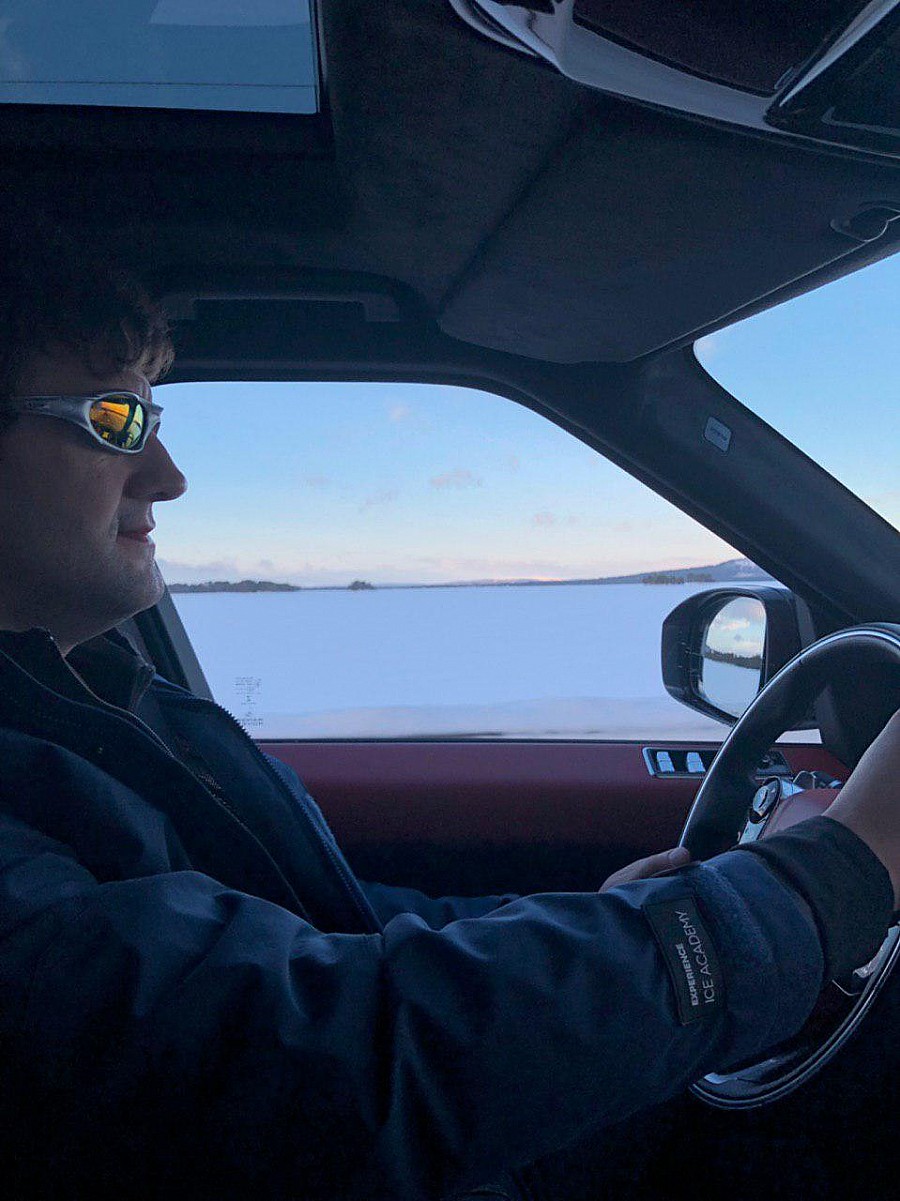 The tour includes chances to drive a Range Rover Sport and Velar, as well as the Jaguar I-pace and F-Type’s around a range of handling circuits, slalom platforms and tracks. And turning off the Dynamic Stability controls is definitely allowed.

There are about 30 people in our group, split into groups of 10, with 5 cars in each sub group. Guests taking it in turns to drive 40 minute long sessions interspaced with coffee and cookies. 2 Instructors give you a demo of the courses and then park up and give instruction, tips and gentle tuts when you park it in a snow drift via a radio wedged firmly into the cup holder.

They also have a subtle and ever present recovery vehicle with a winch and long rope ready in case you over cook it. 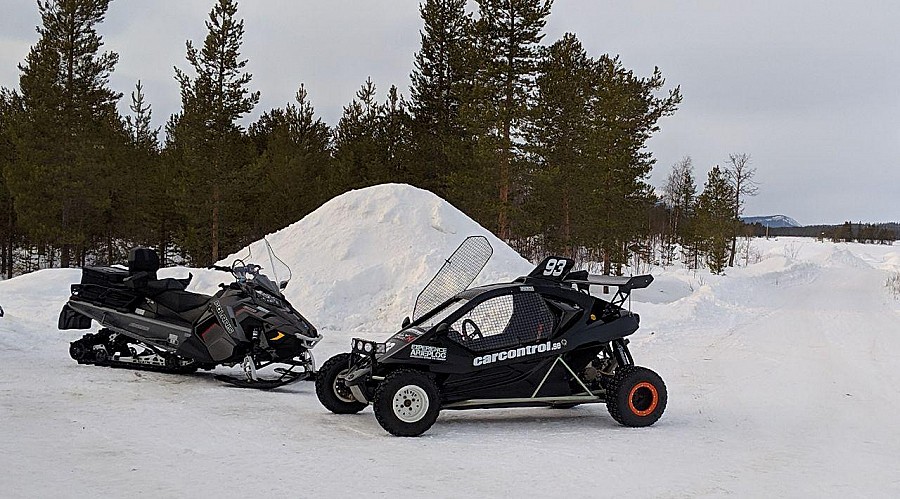 Which we did. Twice. The first time round was over exuberance, the second was wheel arches full of ice from the first off causing the steering to bounce around. A quick brush out and she was good as new. 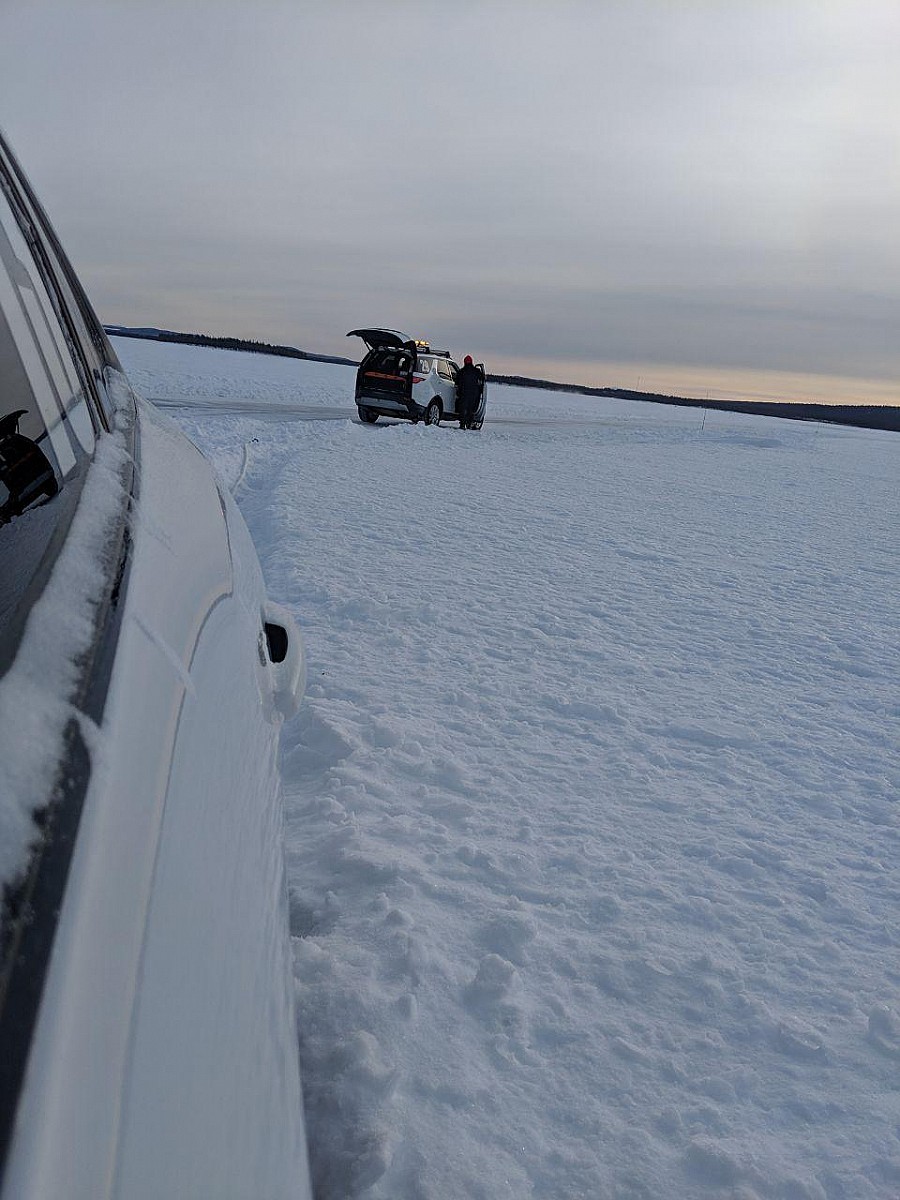 Other adventures are available. Some of them petrol powered, including snowmobiles and this fun looking 750cc Honda powered kart. Some of them are less petrol fuelled. 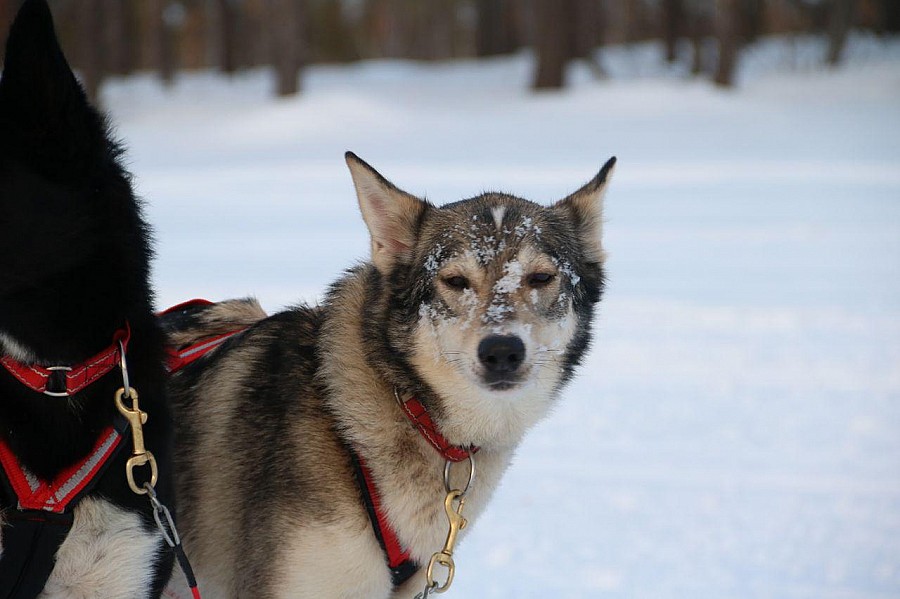 As for the actual driving events, day ones stable of cars was the Velar, F-Pace and Range rover sport, in a mix of handling tracks and slaloms. The RangeRover was used primarily to teach about weight transfer in a slalom, whilst the far more “Chuckable” F-Pace was used for handling and faster circuits and the Valar was used for more sweeping circuits. It ended with a technical explanation of weight transfer and cornering, which to be honest might have been more useful at the start.

Day two moved us to the F-Type instead of the RangeRover, a move to rear wheel drives and a much lower ground clearance meant that the ability to snow plough the banks at the edges was greatly reduced. The final driving session was linking everything together to drive the F-types around a tight handling circuit. 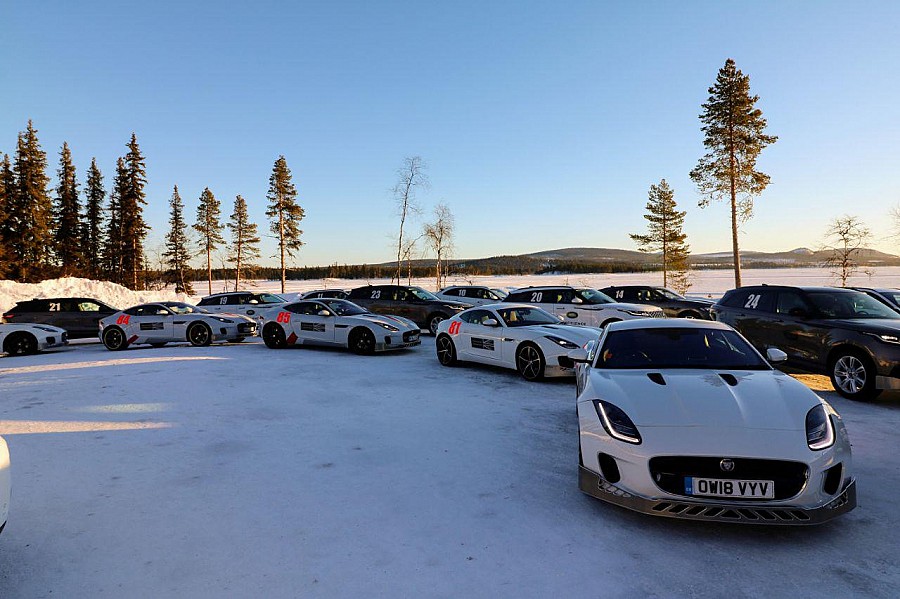 Day two ended with a tour of the Jaguar testing facility, a big garage with a lot of well camouflaged vehicles and no cameras allowed, followed by a fast lap in an F-type SVR with an instructor who clearly wanted to scare the living bejesus out of you.

Dinner was also arranged in a special wooden lodge somewhere, but it was on the back end of a 12 hour day so, we skipped that bit. 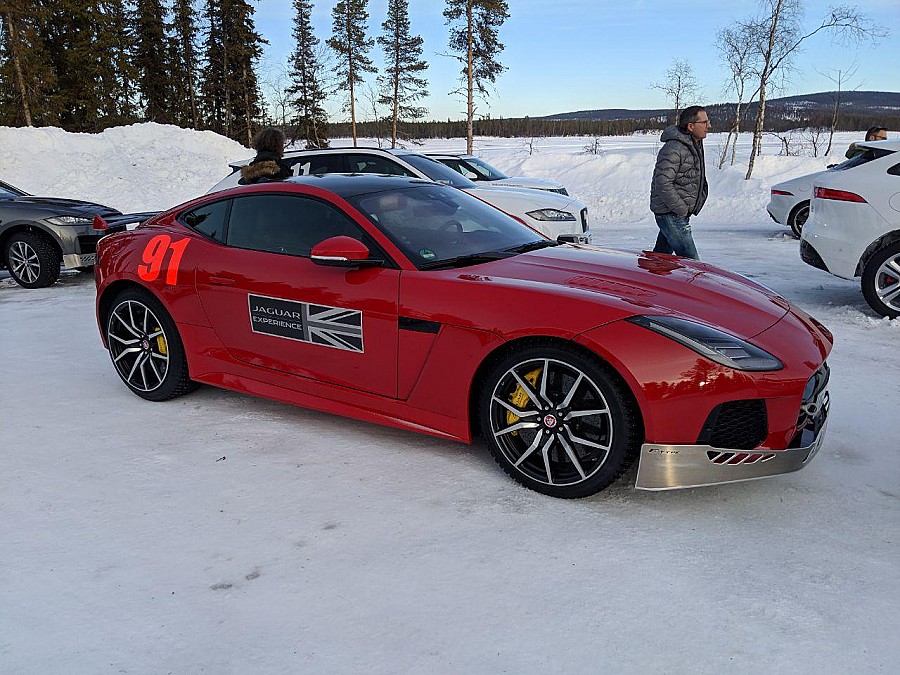 Overall the driving was interesting, a good solid mix of teaching and letting you get on with it, along with a nice range of cars. There was a fair bit of “hanging about” between drives, and waiting for other guests, but it’s to be somewhat expected when trying to wrangle that many people. The staff have been absolutely lovely and have looked after details such as logistics, booking of activities and food well and if you are looking for the all in one package, this feels like a good start.

Other companies are clearly doing the same thing. LapLand are baed at the same hotel and the prices seem much the same as Jaguars Offering, about €3,200-3500, with different hotels and access to different (Less Jaguar Specific) cars.

Negatives? This is highly curated, you get the pre-planned sessions, events and pre-booked optional extras are added in if needed but you are very much “On schedule” for 2 days. The Itinerary is full and whilst there isn’t a lot to do in the local town, it would be nice to get to see a little bit of it occasionally. We didn’t realise as the exact Itinerary was only given to us on arrival. We also tried to upgrade our fast lap at the last minute, and were told “Late booking fees” were to be added, on top of the £150 being charged for effectively a 5 minute car ride.

Arjeplog is also in the back end of nowhere, so flight options are rather limited. Not really the fault of the organisers of course, but just something to look into before you book.

Whilst there is a range of advanced drives on ice, we would probably eye up something different, as sliding sideways on ice can be a bit Samey after an hour. 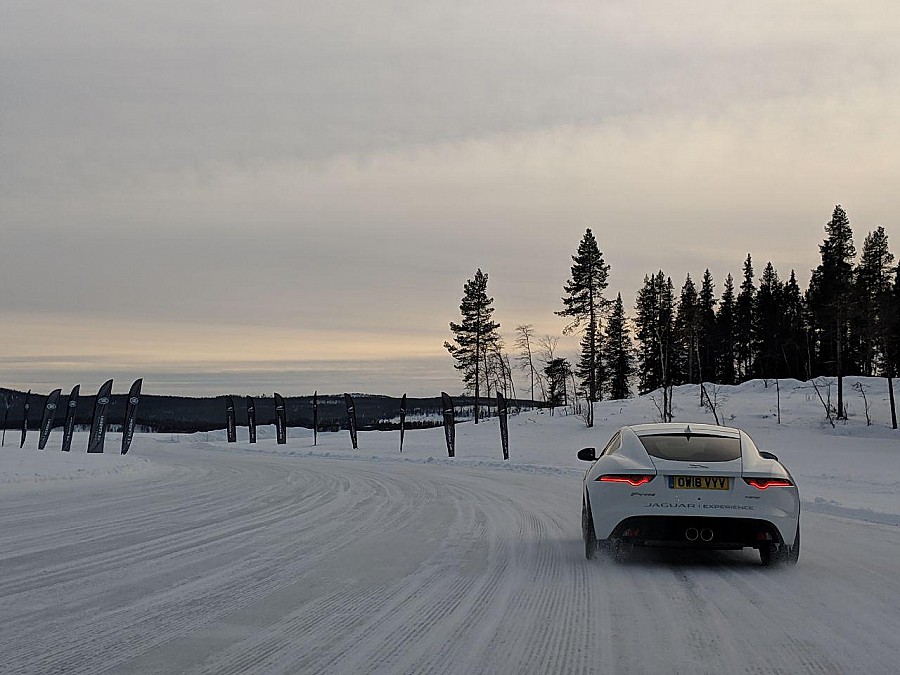