Admittedly, we have been away for a while. For good, ish reason.

Ermy finally got through her IVA after a lot of fettling, even more radiusing and the application of a new steering wheel. We got pulled over twice driving to the IVA, as we had no plates, but since we had all of the insurance and booking paperwork, they let us go on our way and were pretty friendly about it. 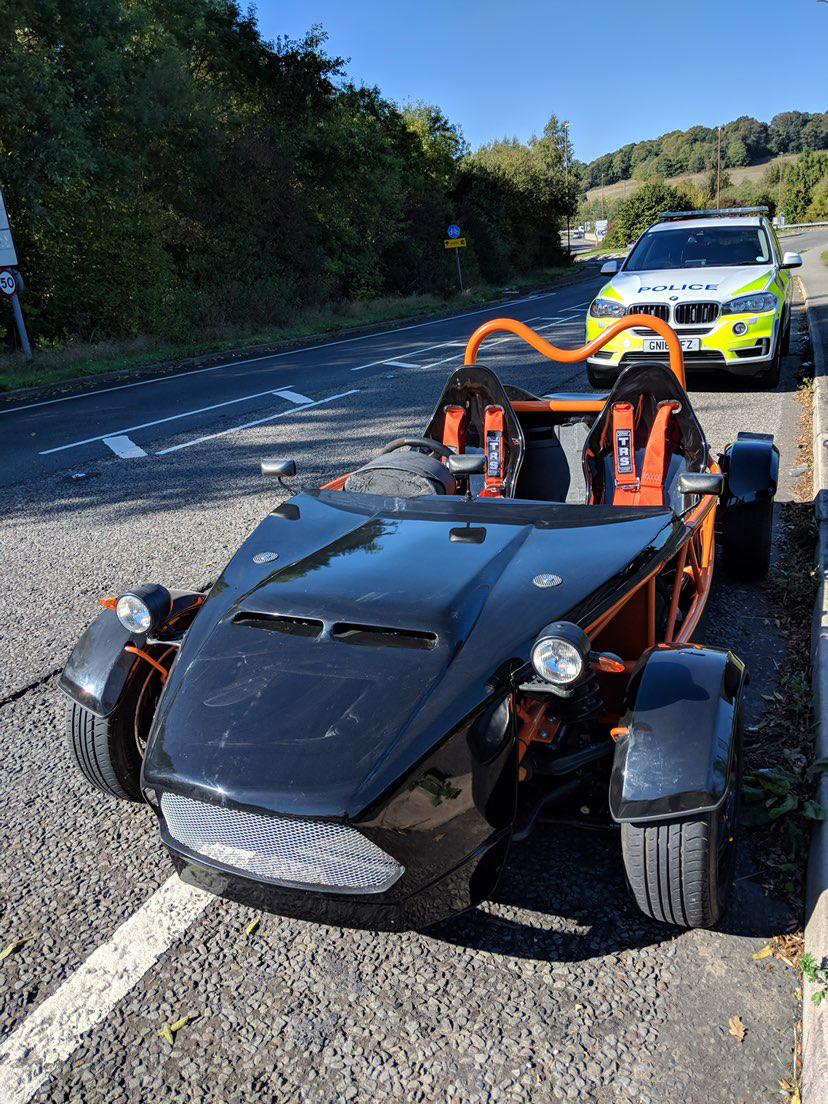 Following this, we had to get registration plates, which took slightly longer than expected. At one point, we were issued with an 18 year registration plate which was problematic as we wanted an age related plate. When we pointe this out, for several weeks, nothing happened.

Then suddenly it was road legal and it was time to go do silly things, but it was winter. 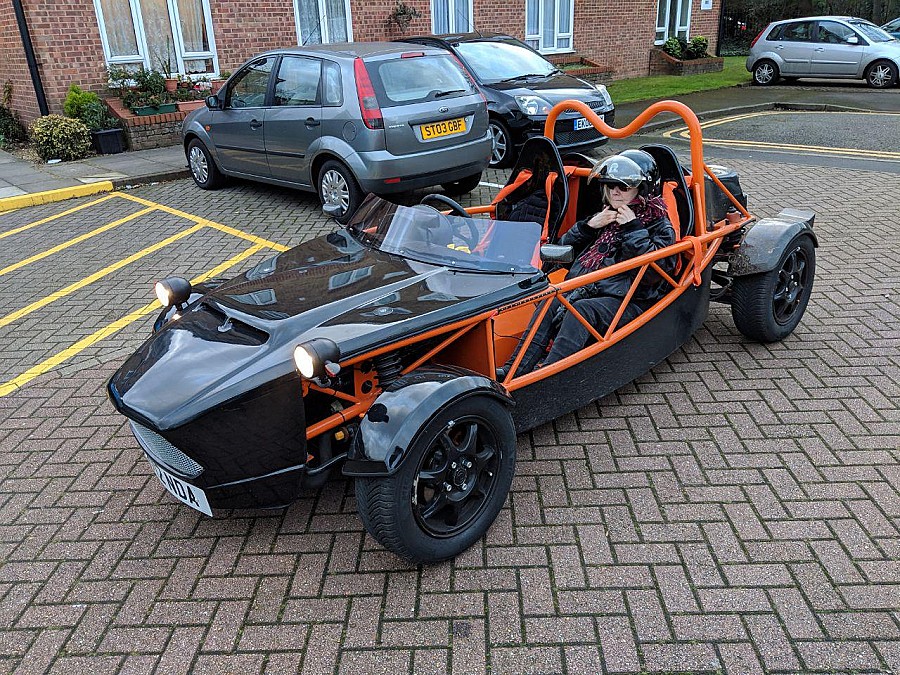 We managed to get an adventurous little old lady (Ex biker) out onto the road for a bit, but given its now -1 degree out, we aren’t doing so much driving. Even though we fitted heated seats (Aldi, £12 each, plus a little three way Cigarette lighter adapter from a boat)

In the last 500 miles of driving, we have learnt a few things. Firstly, we already want more power. Secondly, we want better suspension. Thirdly, those GRP seats that come with the car kit, they don’t work if you’re 6ft 4 and as wide as the Wookie.

The last of these things is easier to fix than the first two (though we are currently are in the process of fitting a supercharger, more on this later) as seats are readily available, right? 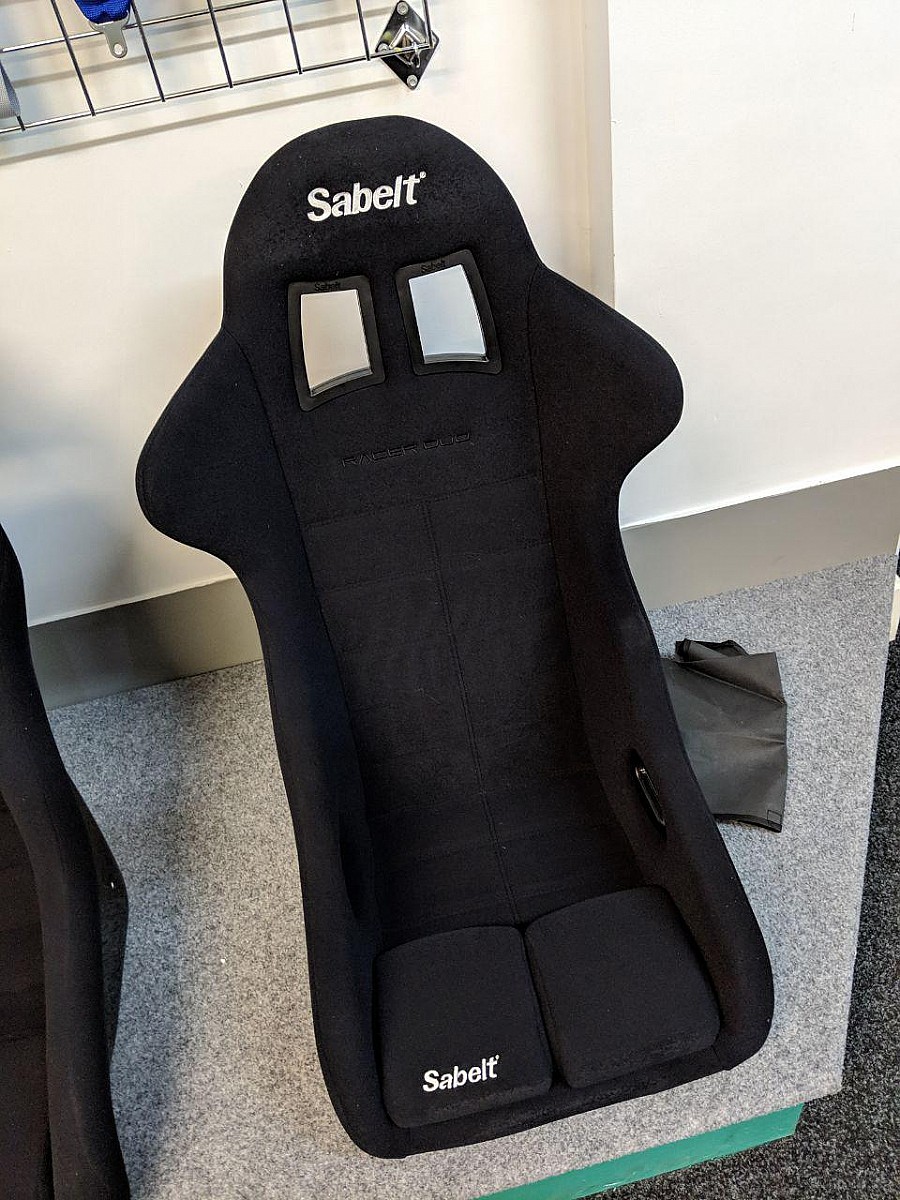 We are fitting Sabelt GR-090 Racer Duos, provided by GSM Performance (With the help of Garreth who talked us through the process) for one simple reason. They fit in the car, and we fit in them. A note from the GSM Performance site “We recommend this seat for drivers on a budget with a larger than average body type” - I think they just called us fat….

Its a fair choice though, the issue with the MEV is that the passenger cabin narrows toward the rear, and the drivers side has limited space to start with. 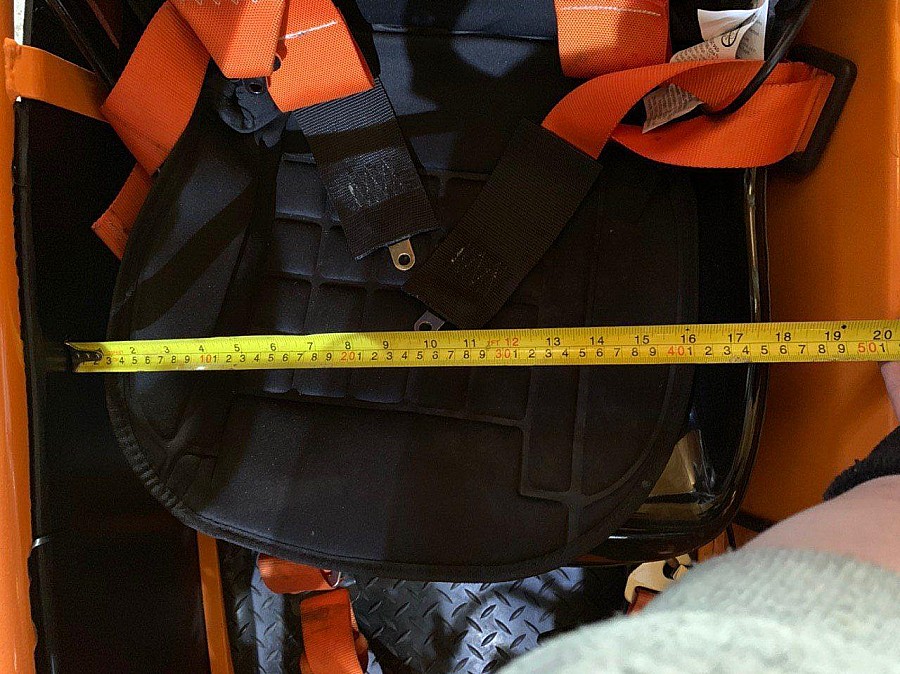 At its widest the space between the body and the transmission tunnel is a mere 51 cm. The issue is that a lot of the more comfortable, long distance, reclining seats which are available use the same reclining mechanism and are as a minimum 51cm wide. As the cabin narrows when we have the seat far enough back in a comfortable driving position, we wouldn’t have enough space. The seat would butt up against the centre column and the body work. 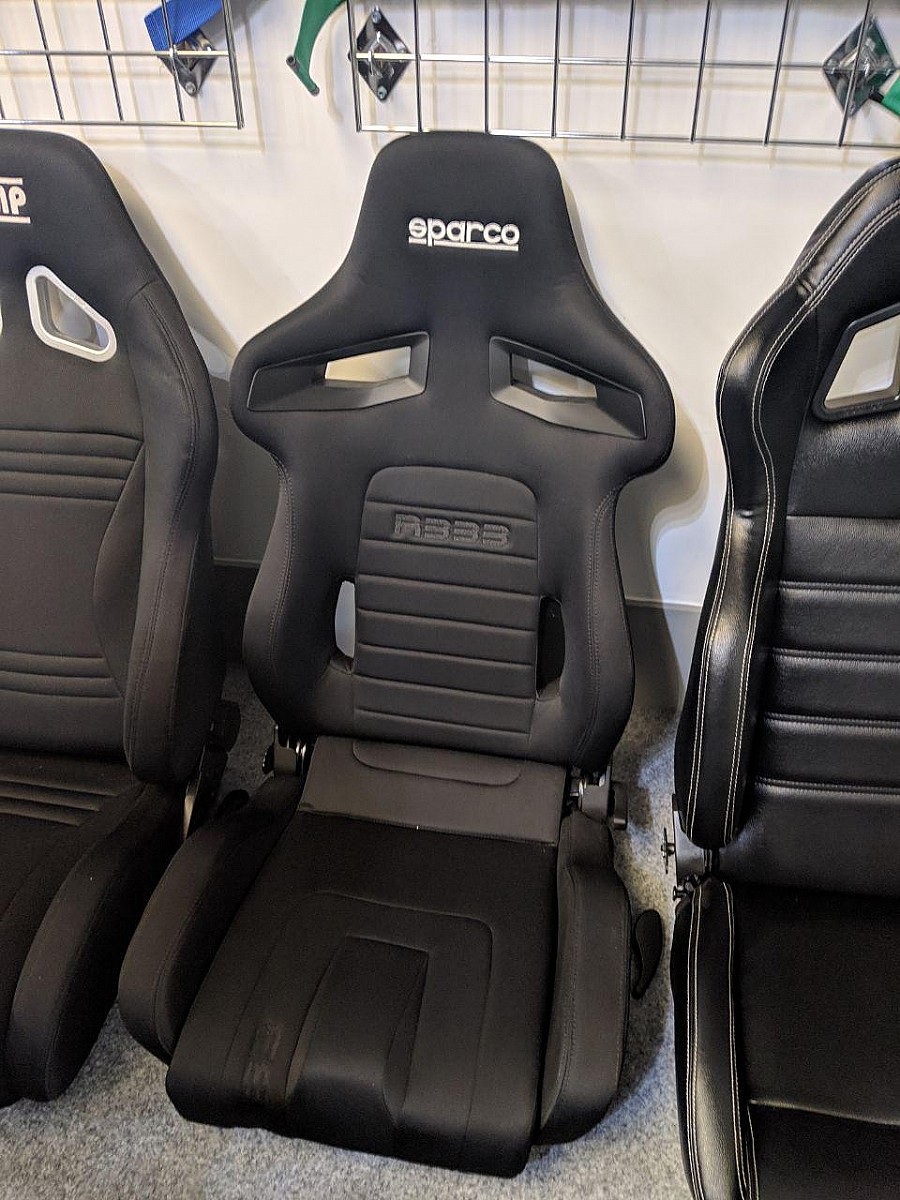 A shame, as these all looked bloody lovely. So back to those Sabelts….

These are in theory a direct bolt in replacement for the original MX5 seats, and thus for our bucket seats, this is assuming that in replicating the length of the runners, MEV also replicated the width of the mounting points. When they arrive, will will find out if they will work. But for a very narrow seat, they do have the benefit of fitting a slightly wider driver, again as GSM say “this is suitable for drivers upto a 36”-38” waist.”

Once we have a proper set of photos of them in place, will will post an update.

So, fitting was not as easy as originally planned, of course….

Sadly our MX5 runners dont actually bolt directly to the seats at all, a different hole needs to be cut, and then the runners are spaced differently on the Sabelts, sitting a fill 2cm wider than the original seats. The downside of this is that we have already cut holes in the floor of the Exocet, and don’t particularly fancy making more.

So, if this was your first set of seats, they would be perfect. If they aren’t you need to re-enforce the floor bars to try and coverup the olf holes and make sure that the bars aren’t like swiss cheese. 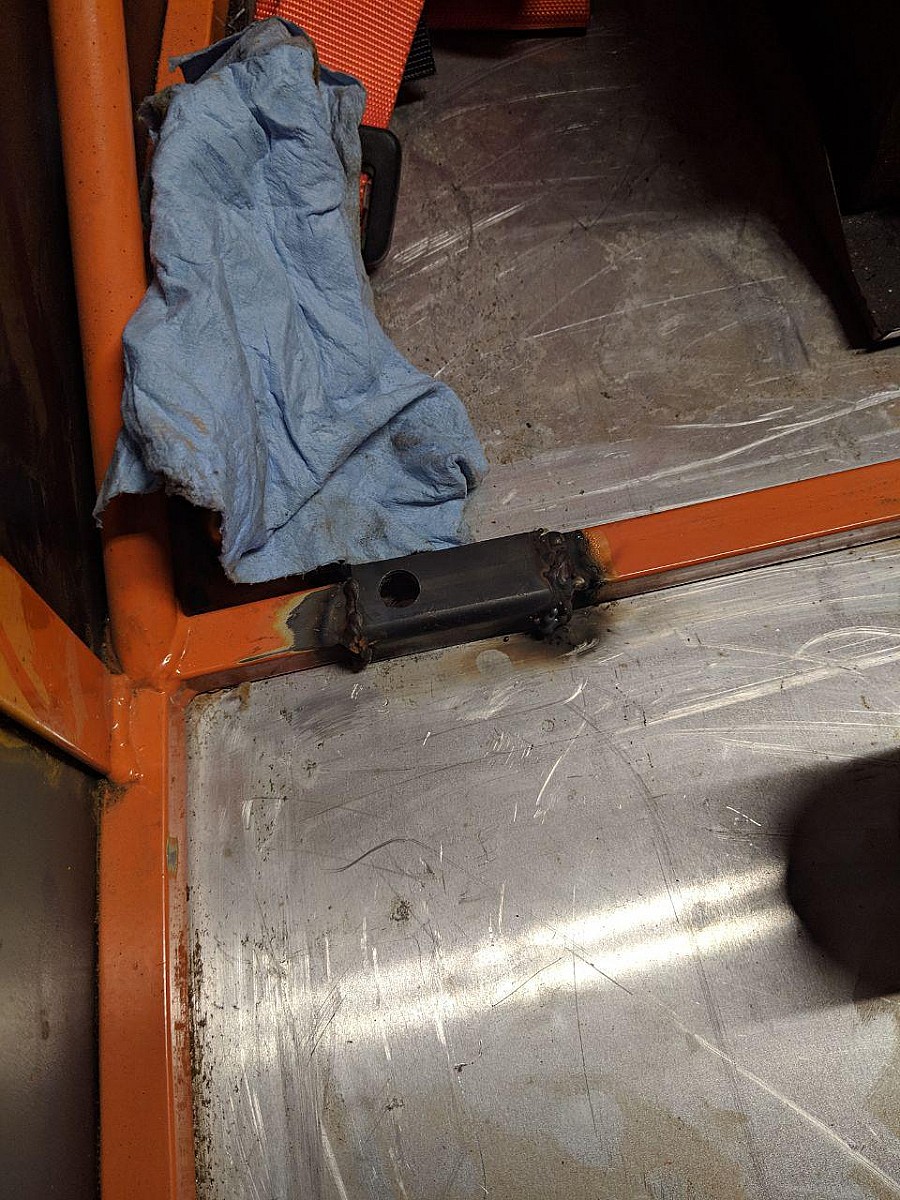 So, we welded some angled steel around over the old holes and cut some new ones. A spot of paint over the top, and hopefully there is enough metal down here to keep her together. 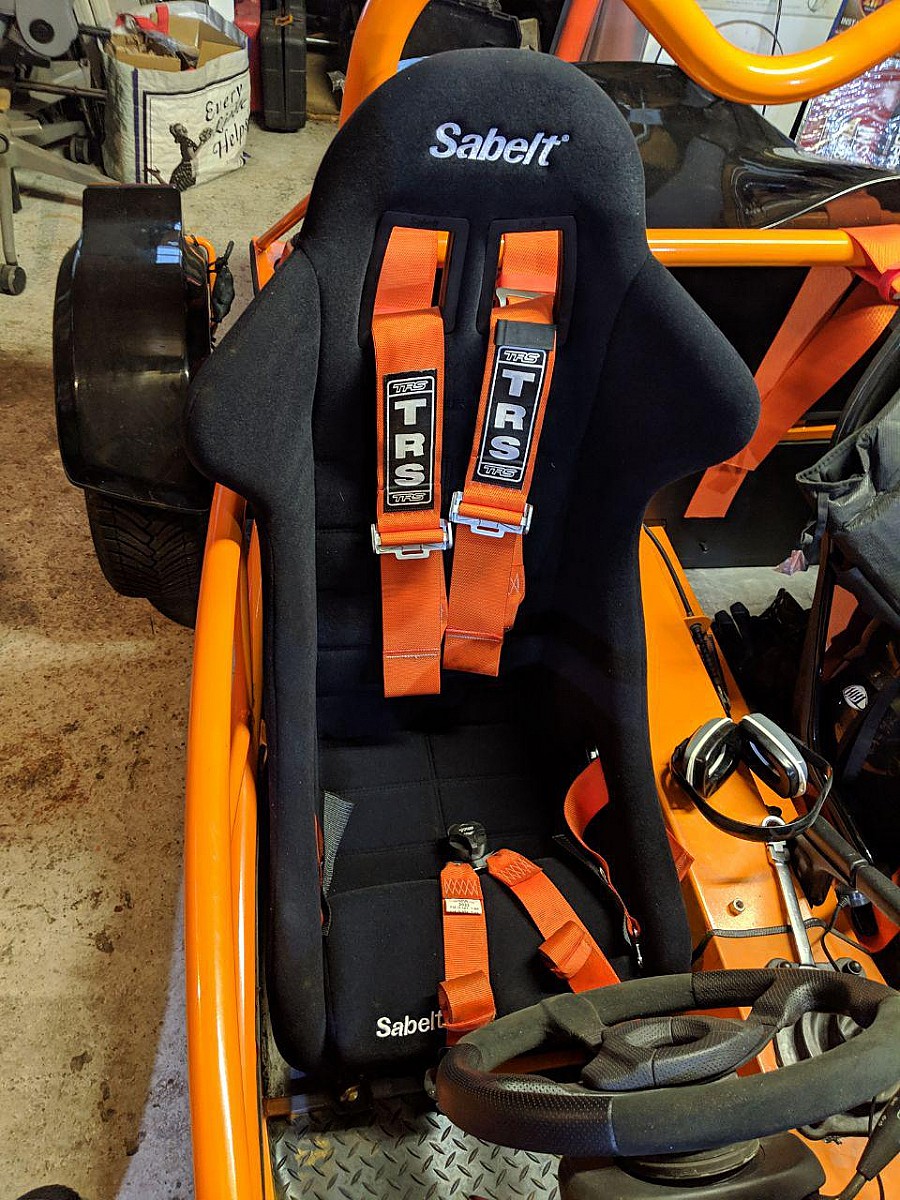 Now I also need to put a smaller battery in so I can get the seat all the way back. We are definitely into the long fettle….

Next up, hopefully some info on superchargers!