Yesterday was our first day of working with parts from the actual Exocet kit. Until now we have focused on the donor car, stripping and making it ready for our new chassis.Yesterday started off with more of the same, fitting the last wishbone and then putting the skateboard back down onto the wooden chocks which are acting as a stand in for the suspension to stop the whole car sagging to the ground.

We are now ready to get the chassis itself on, but there is a floor in our plan. Literally. 3mm of aluminium that needs to be in place to stop us trying to Flintstones this thing along. 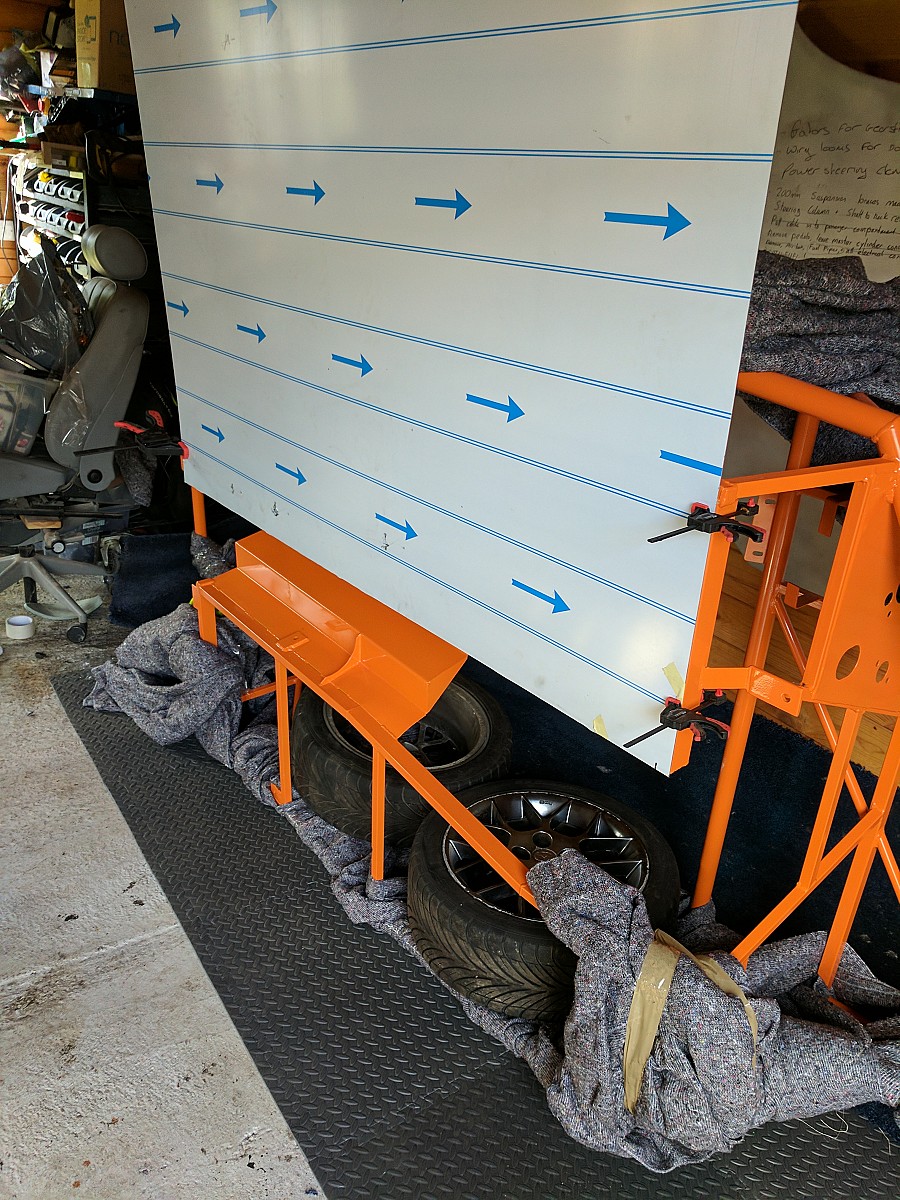 The MEV build guide calls for a fine tipped metal jigsaw blade and the use of a lot of WD40 to prevent the blade clogging and wearing out. Personally, I just got a new toy. The lovely people at Aldi occasionally sell air powered tools and compressors and when I saw a set of air sheers a while ago I thought “I will find a use for that eventually” 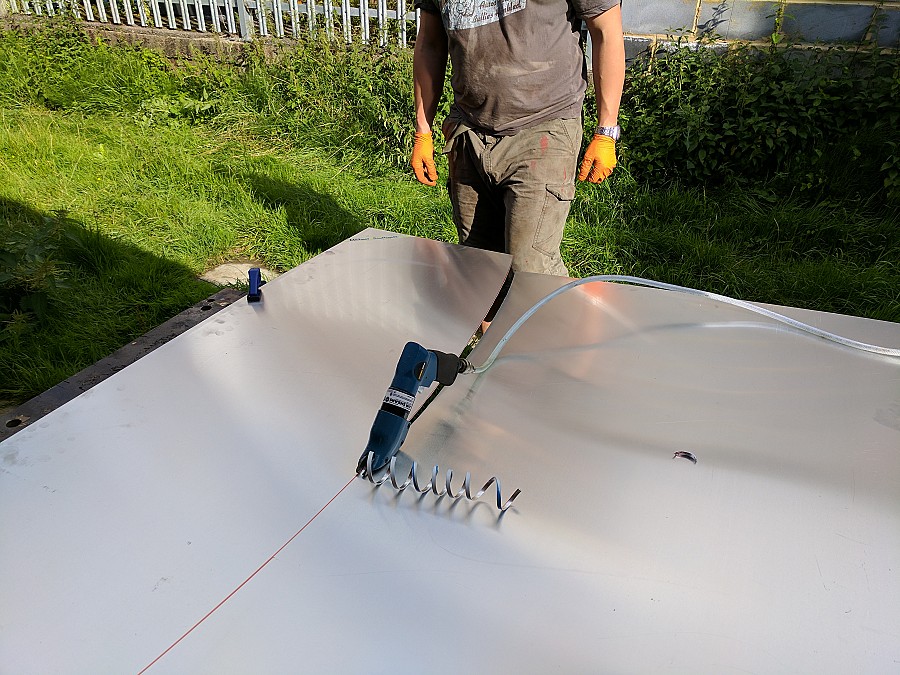 It certainly works and for £20 was well worth it. The only issue is that you need the compressor to run it from. Once again our little 25 litre compressor which so far has sprayed 2 cars and powered the air wrench so nicely was able to kick out enough PSI to run the tool but only in short bursts. Mental note, when I build a bigger work shop, buy a bigger compressor. 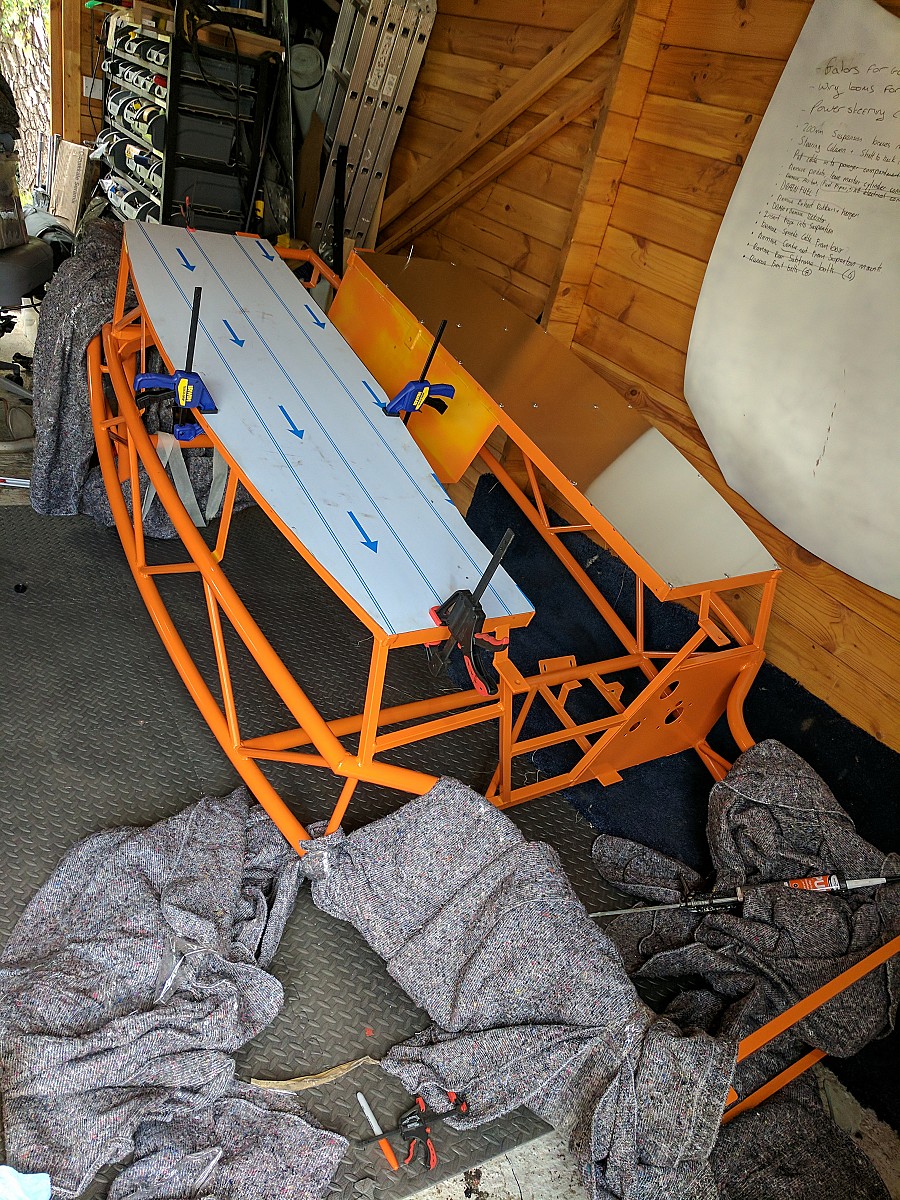 Once cut the Aluminium panels are Polyurethane adhered into place (Same stuff as the bushes, but this time in a gunky black caulk gun) and then riveted using 4.8mm (For reference you drill a 5mm hole to accept a 4.8mm rivet as finding a 4.8mm metal drill bit is near impossible) rivets at 10cm centres (Which means spaced 10cm apart to the centre of the rivet)

There are 90 rivets provided. Sadly my cheap rivet gun didn’t make it. 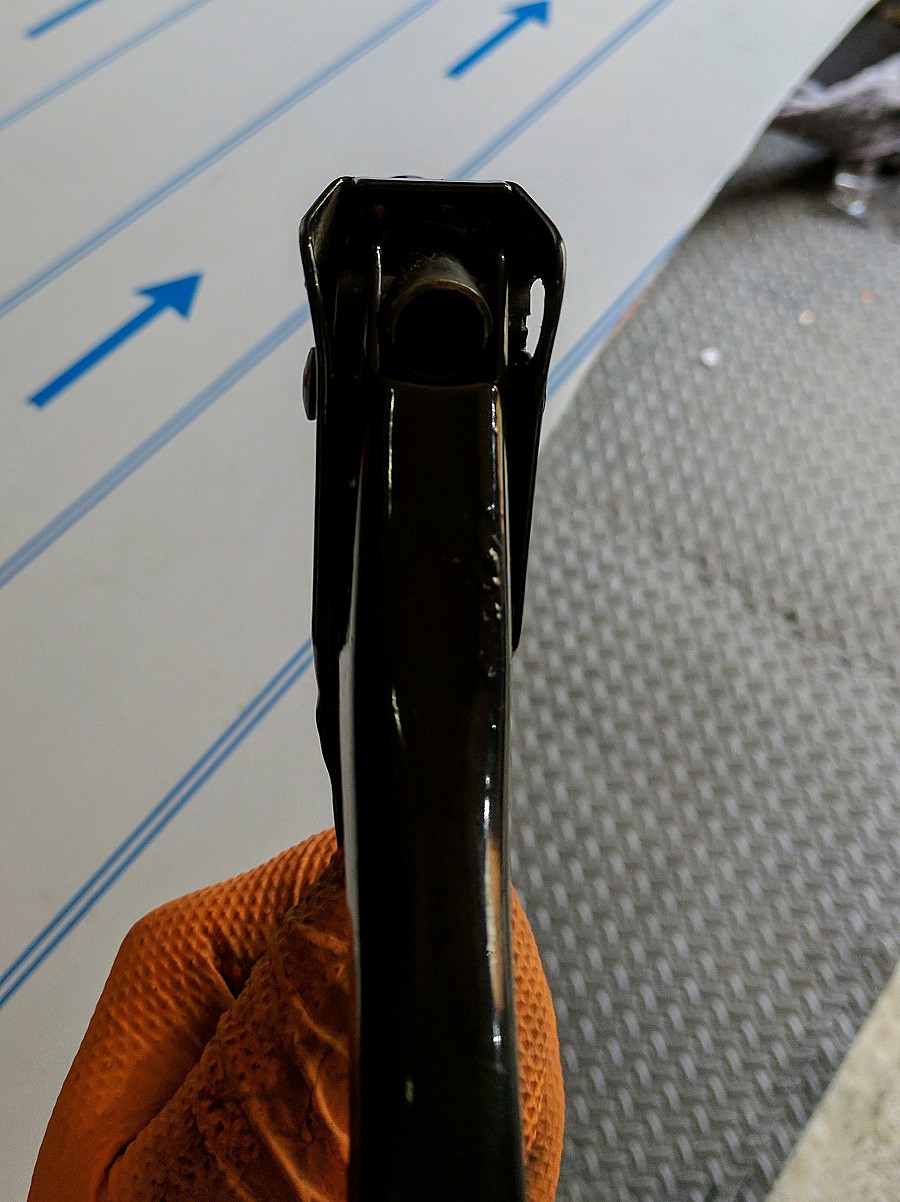 I suspect I purchased this 10 years ago back when I used to purchase cheap tools and used it for some small rivets. Putting a pile of big rivets in just killed it. The rear of the tool splayed and it was no longer able to grip the rivets. 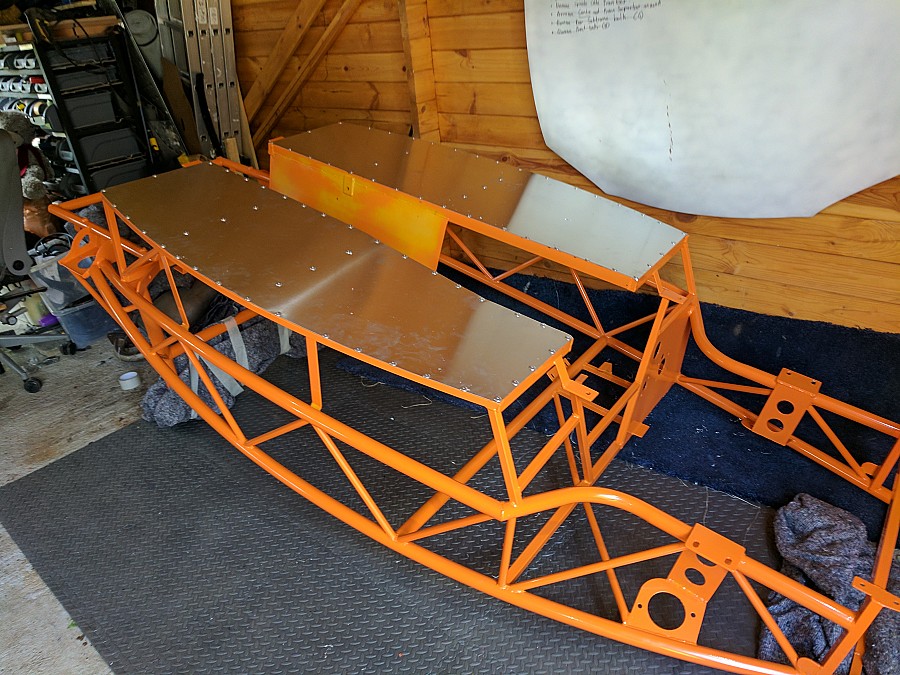 A trip to Screwfix later a nd we now have a floor in place.

It was then time to lower the body onto our skateboard. We used a pair of work-mates to line the chassis up, then had 2 people lift the chassis as two others removed the work mates. 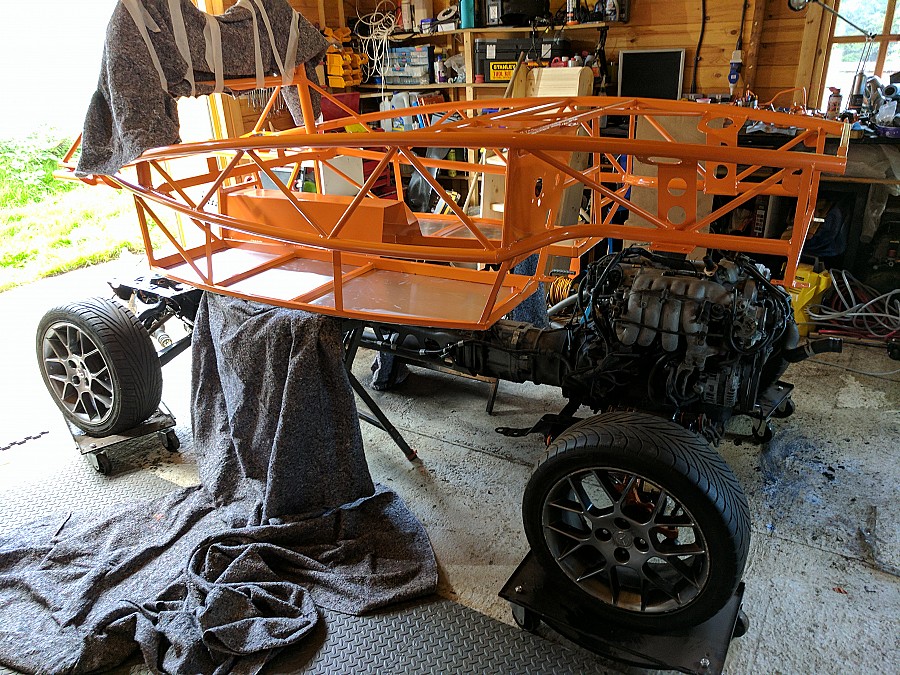 As we lowered the chassis we discovered that the exhaust was fouling the inside of the tunnel on the chassis. We removed the rear hanger which allowed the exhaust to move sideways out of the way, but now means that there is no support holding the back of the exhaust. We will need to find a way of supporting this, such as extending the hanger or adding another bracket somewhere.

We then set about bolting the chassis to the skate. The rear is relatively simple, there are 4 bolts directly through the tubular frame of the chassis and some 90mm bolts.

The front has 6 bolts (The Mk2 Donor car has additional spaces for bolts to the subframe. Mk1’s do not appear to have this) For some reason we have 8x90mm bolts, 3x30mm bolts and 3x40mm bolts. The guide from MEV is amazingly non specific about what size of bolt you need where, though oddly the version of the document on the Exomotive (Use licensed builder of Exocets) does mention the bolt sizes. In short, we have used what looks like the most sensible combination of bolts, but no promises as to whether these are the right ones.

They are certainly strong enough however, even if not long enough. 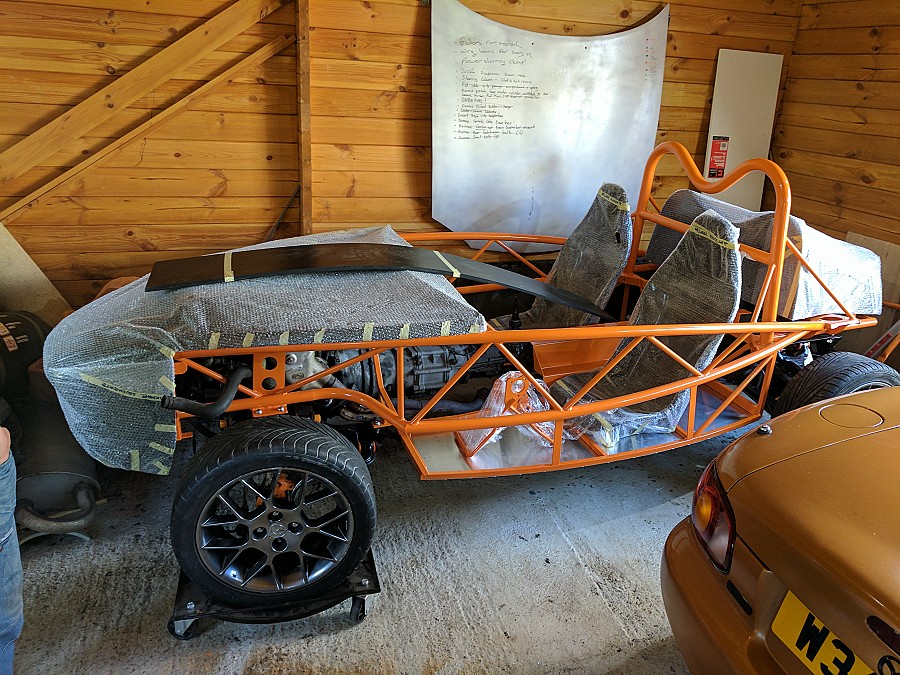 So looking at it now with the bonnet just thrown on and the seats in place, it looks sort of done. As long as you ignore the fact that it has no steering, no radiator, no fuel or brake lines and no seatbelts…. but hey, what are a few minor safety features between friends?