The downside of an Exocet is that everything is on display.

Well, thats either the downside or the main reason that its super cool. The problem with our 20 year old wishbones is that they are literally caked in rust. 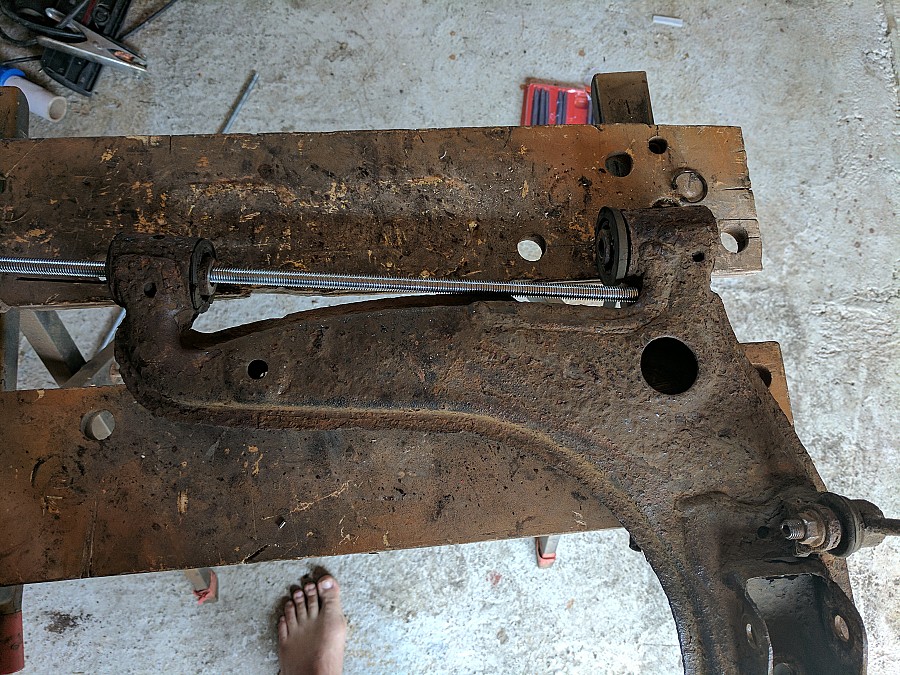 Even the replacements we brought had a layer of deep rust all the way over. 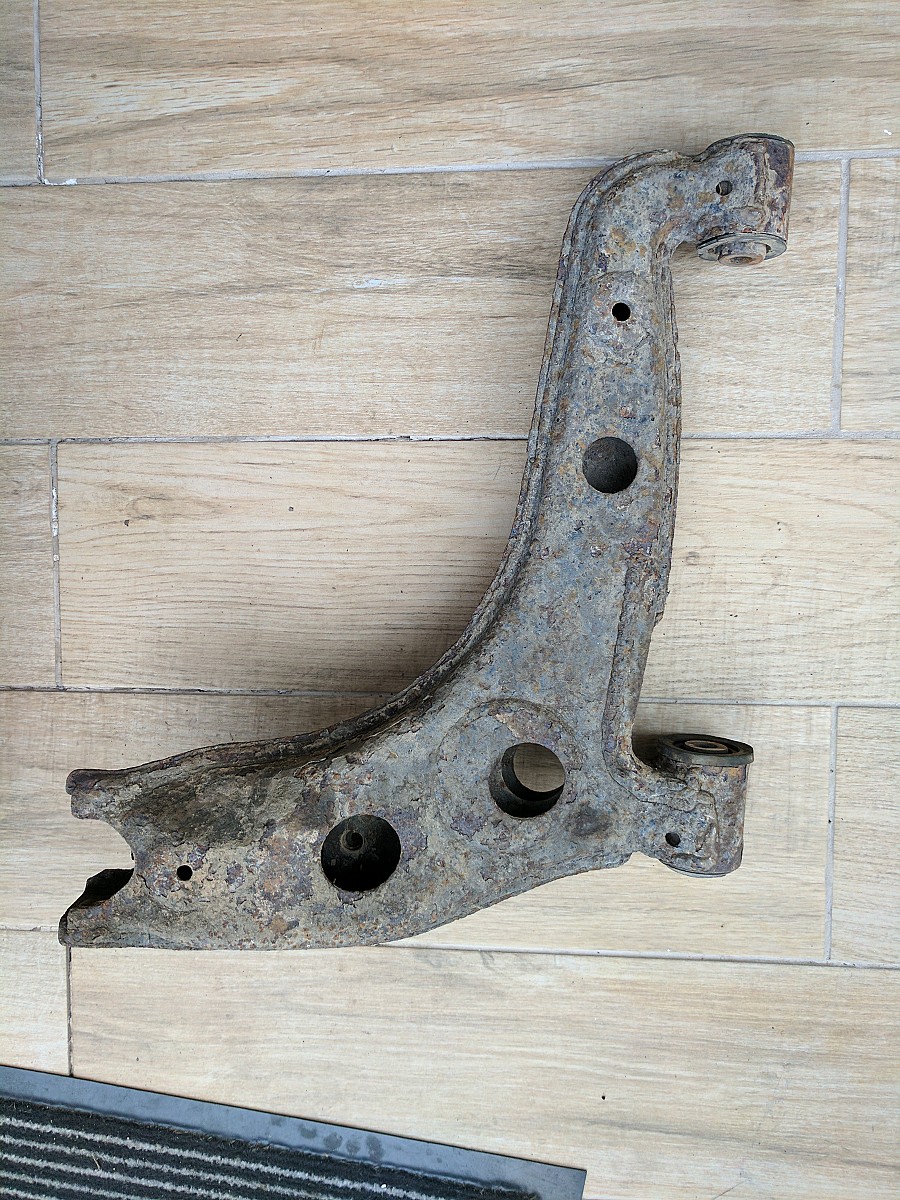 These were from a reputable seller who guaranteed that these would go through an MOT, and after a bit of grinding, the metal beneath was found to be good quality, the rust was just well established surface rust layered on top of even more surface rust. 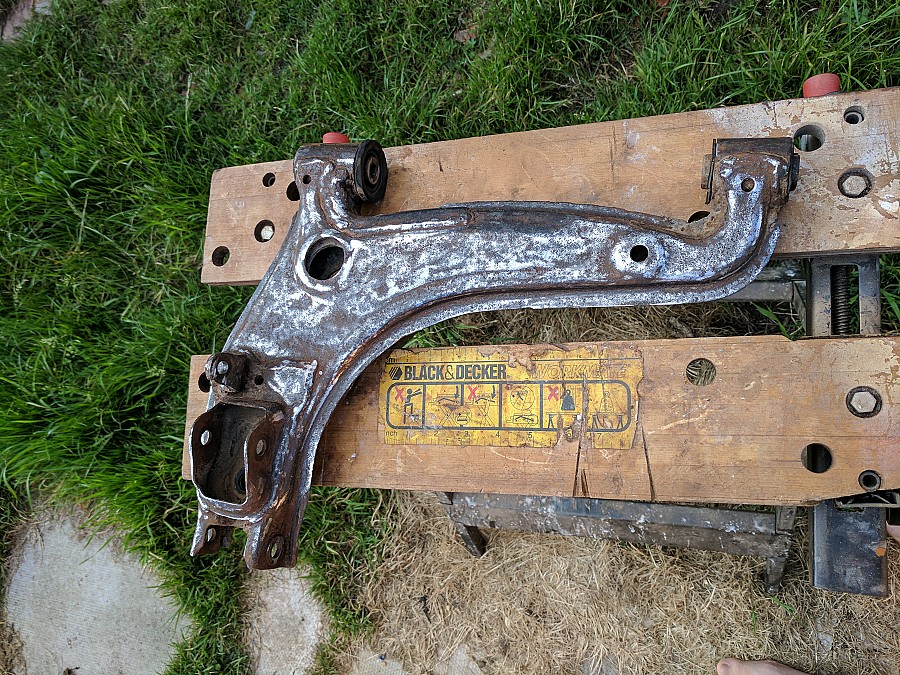 Our big issue was how to clean them up in the most effective way so that we could repaint them. We tried 3 methods in the end, Abrasion, a “convertor” gel and a liquid bath that they sat in for a few days. Another option would have been sand blasting, but that is less of an “at home” option and I do not have a blast cabinet. Yet.

Convertor Gel The gel was horrendous. All that happened was that the thicker chunks of rust turned into a sticky black goo. We went and had a google and at least now understand this process a little better. 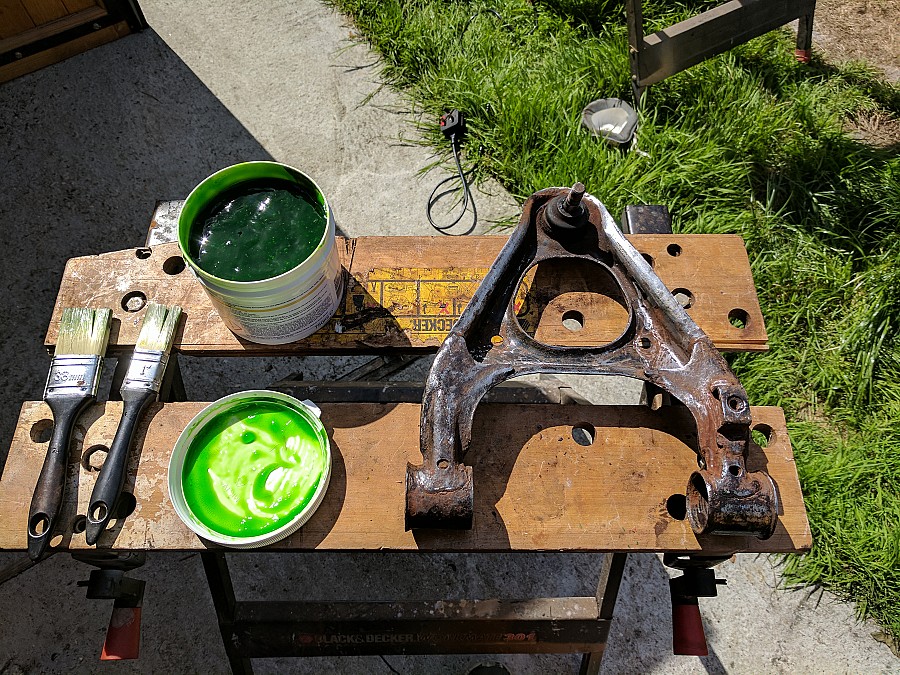 The rust convertor contains a substance called Tannic Acid, which when it interacts with the rust creates Ferric Tannate. This is a much more stable material than the rust and also prevents more rust from occurring. But it doesn’t remove rust, so in our case when the rust is on display, it just looks awful.

We cant deny that this certainly does the job though, and if you have a part you cannot remove or which has more than just surface rust, this might help stop the problem getting any worse without having to remove and weld new bits in.

Rust Bath This looked like another version of the rust convertor, but this one is diluted down and you leave the part in a bath for 24 hours. Or there is the theory. After 24 hours, it had done very little. 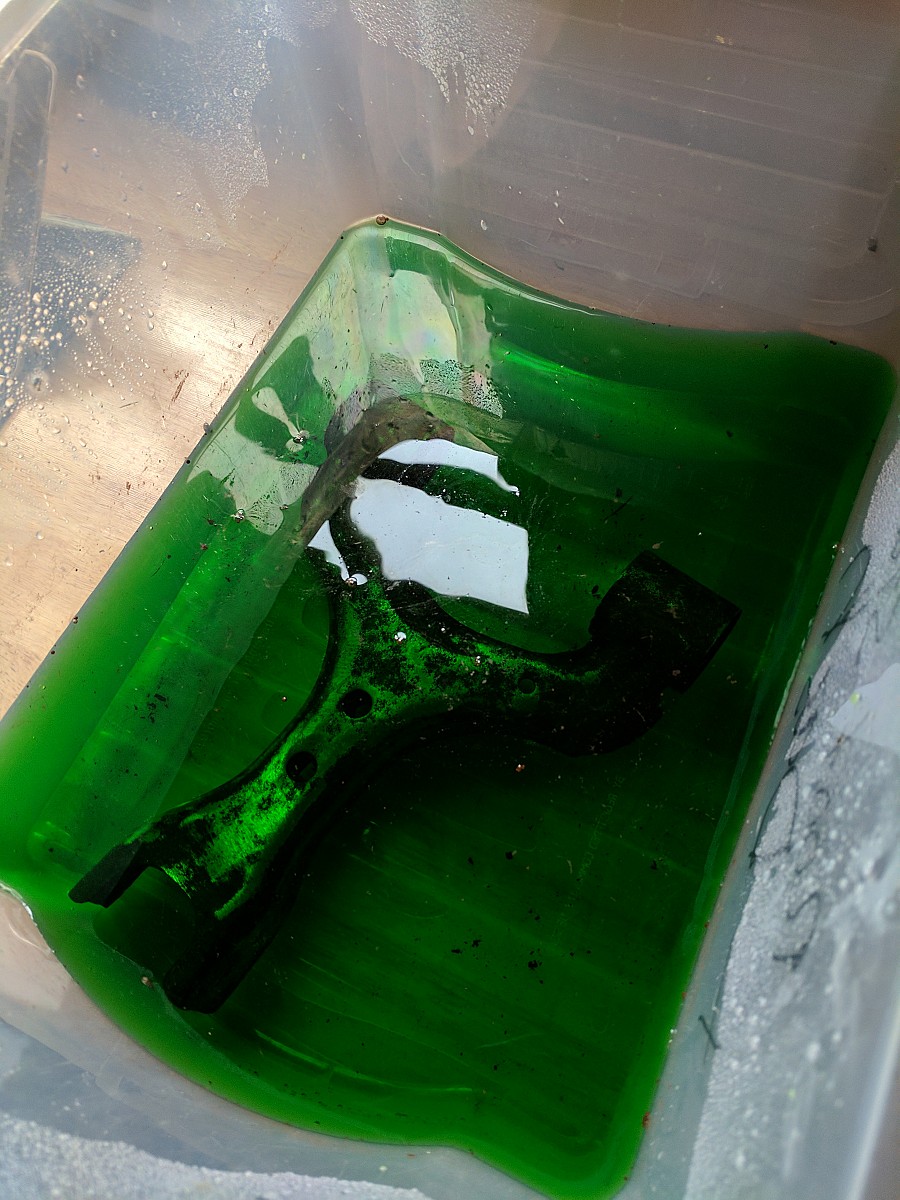 After 3 days however the liquid had gone murky and it had also started to eat the metal, and some of the deeper rust was still present. 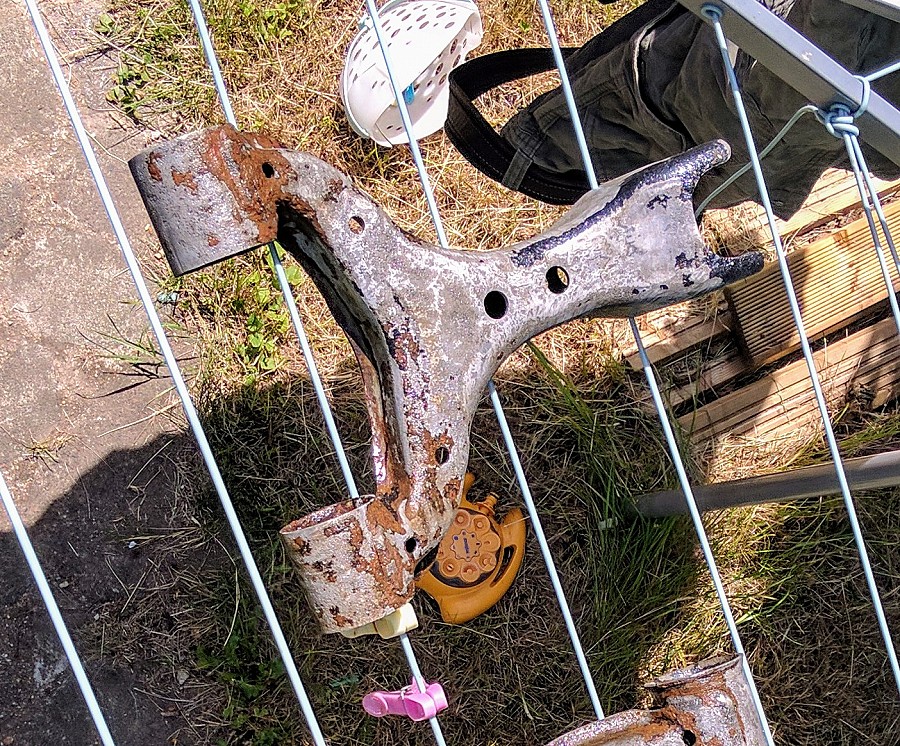 The final pitted effect on the metal was a little worrying and we are not going to use this on any other parts as it just damages the part too much.

Fetch me my angle grinder. 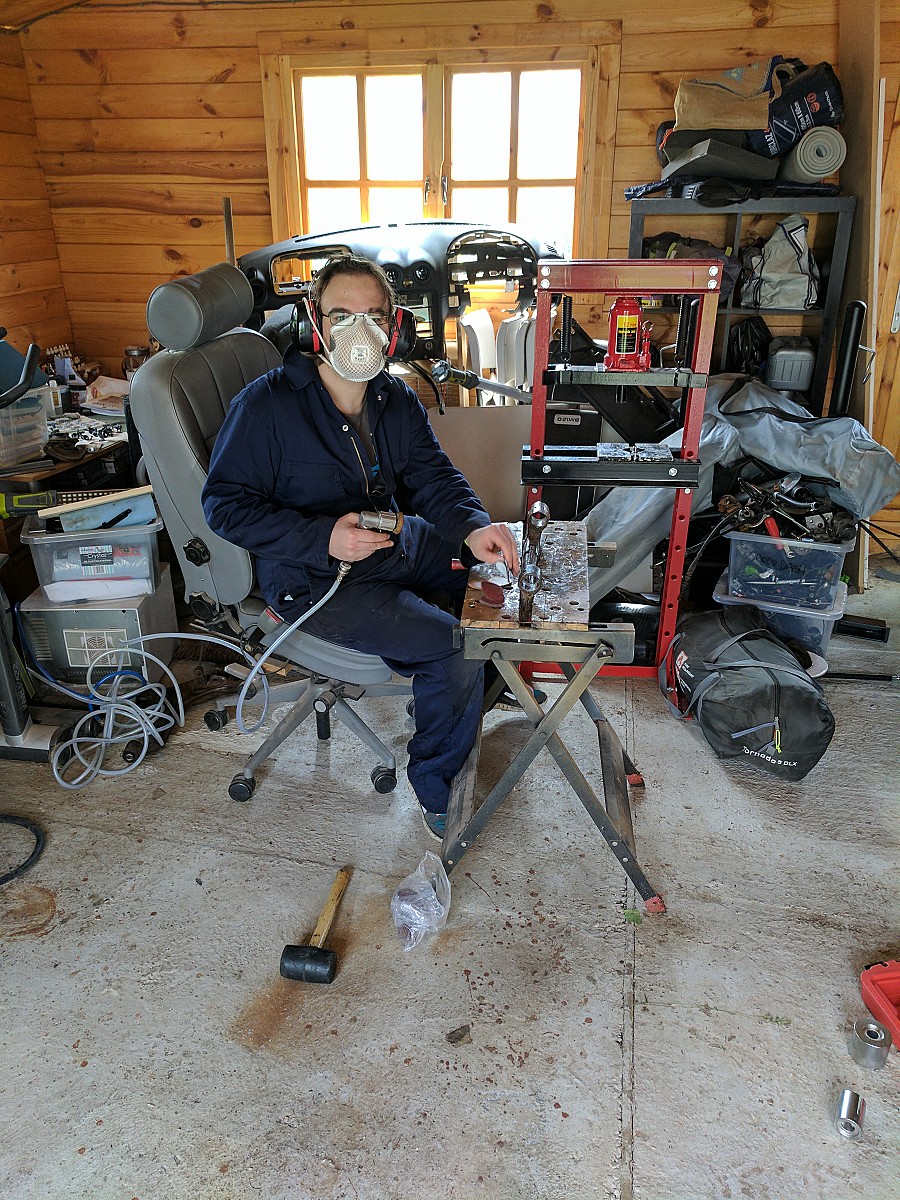 Actually, this started out nice and easy, the problem is that on every wishbone there are a lot of corners and crevices which naturally attract all the rust as this where the water gets stuck. This involved buying a very specific part for the Dremel, and then repairing the Dremel after it died.

However we got there in the end and managed to remove the worst of the rust. I suspect sand basting would have made light work of this and if ever we have another go, I will be making sure a sand blasting cabinet is on my christmas list.

We have decided to paint them for now, since powder coating was not a cheap option, due to the amount of cleanup needed. We have used some Acid Etch primer, then black stonechip paint, then a layer of super tough alloy wheel lacquer. The hope is that these 3 layers of special paint will protect the wishbones from stone chips and hopefully from the next 20 years worth of rust. 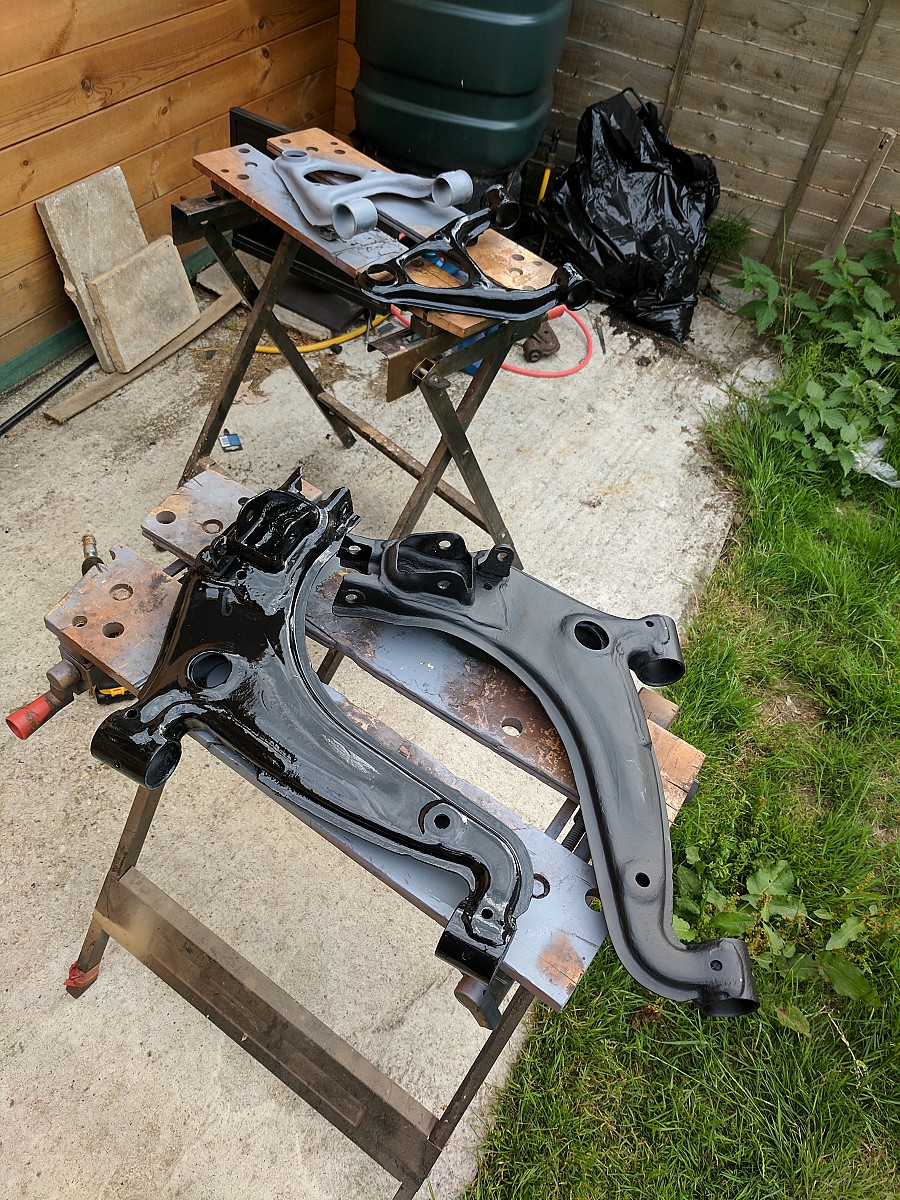 Tomorrow it is time to try and start the rebuild, and get the bushes in!