So the Wookie and his trusty Freelander 1 have returned from Europe. 3000 miles across Luxembourg, Switzerland, Liechtenstein, Austria, Italy and France. It was a long drive and not cheap on the fuel, coupled with €43.50 to go through the Mont Blanc tunnel and then another €120 in various road tolls to cross Italy and France.

Fortunately the Austrian and Swiss police failed to spot the lack of Vignettes which should have been purchased and clearly displayed before driving on their highways. This was fortunate as the whole trip might have got a lot more expensive if we had got caught.

Other than a minor puncture picked up in Austria, and the thunderstorms in Lyon the trip went well. But Ermy is an old Landrover and such things do have their foibles. One of which was a “crunchy” reverse gear selection, the specific symptoms being:

Now old Freelanders do have this as a known issue of sorts. They have no Syncromesh for reverse and so all of the different cogs in the gearbox can be moving at different speeds when you try to engage reverse. This isn’t an issue when using forward gears, but obviously after a long drive with everything up to speed, this can cause issues when you ask it to suddenly change and start moving backwards.

A couple of resolutions are proposed online:

A more sensible suggestion is that the Clutch Master/Slave cylinder has perished and that this needs to be replaced. This is a hydraulic pipe and some pistons which pass the movement of the clutch pedal - 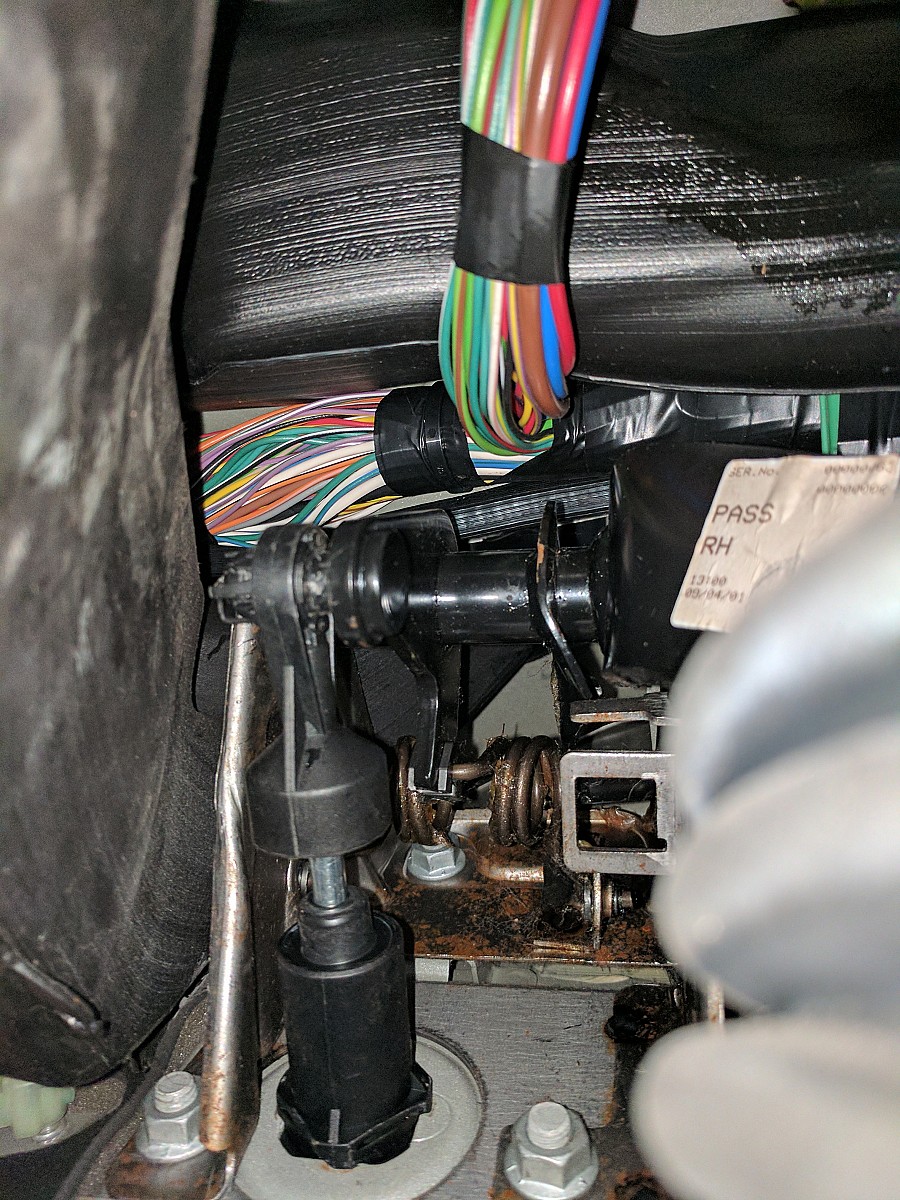 down to the clutch arm, 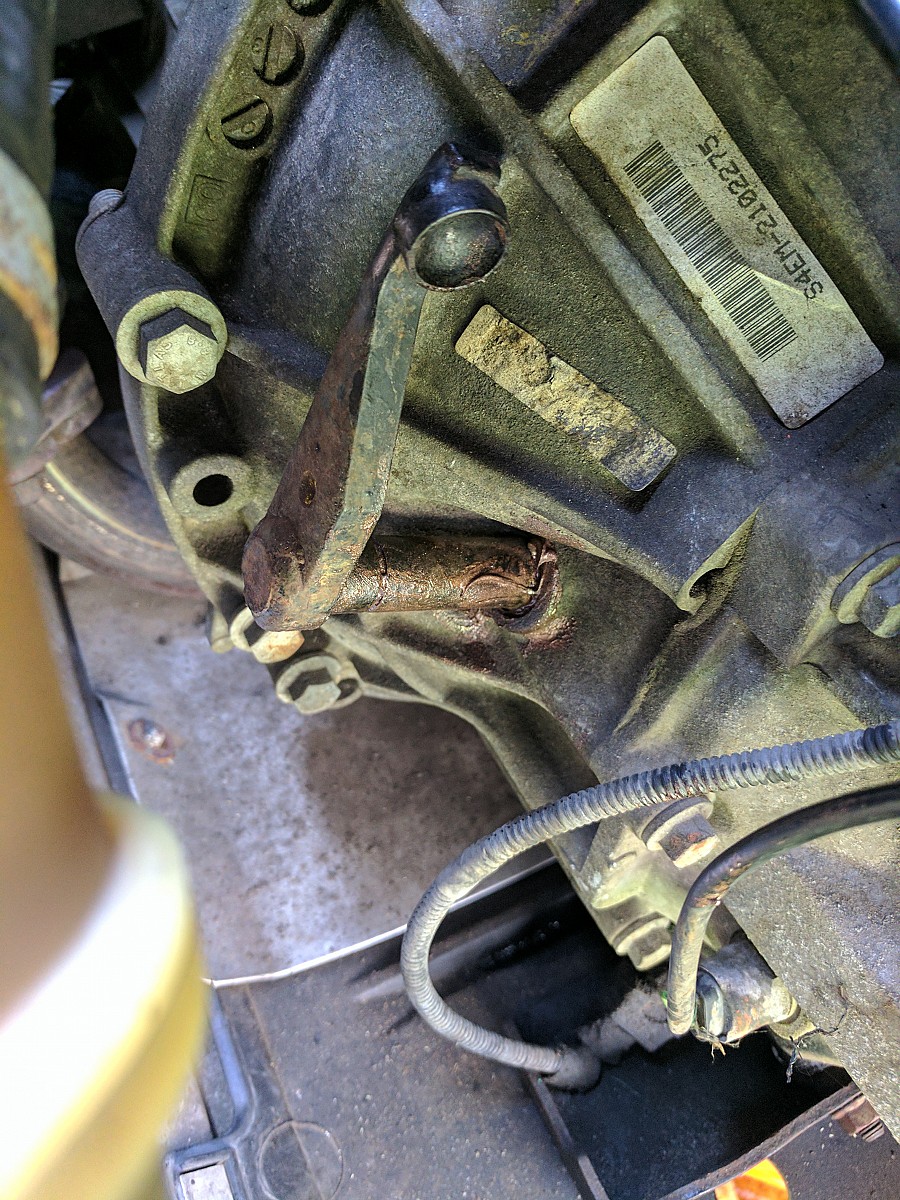 via a convoluted route around the engine bay. 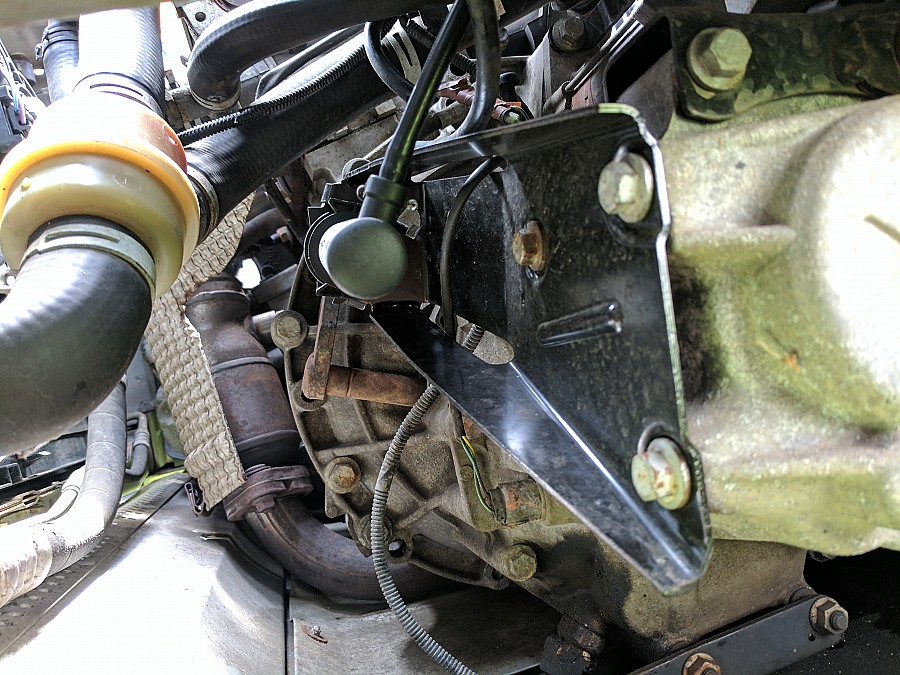 These are sold as a single sealed unit which is great for the home mechanic as pressurized things are a bit beyond most of us. Over time the hydraulic fluid in the unit degrades and generally goes bad, so that when pushed the piston no longer pushes the clutch arm far enough.

A replacement is simple enough. The master cylinder is held in by the metal of the engine bulkhead, simply rotate it 90 degrees anti-clockwise and it pops out. It is held to the pedal by a chunky pin on the pedal and a set of plastic spring clips. You have to lay on your back under the dashboard to remove it, and I will admit that I resorted to brute force and ignorance to snap it off. A proper removal involves a narrow screwdriver and prising the pins back one at a time.

The slave cylinder is much easier. You can find this by removing the air filter box, by removing the two 8mm screws that bolt it to the battery tray. Once removed, the slave cylinder is below, held in place with a simple C clip of plastic to a metal bracket (Some people have reported that the bracket can break and may need replacing. Fortunately replacement brackets are about 10 quid on ebay) There is a lot of movement in the cylinder, particularly when the pedal is depressed, but this appears to be normal.

We also treated the gearbox to an oil change which can be carried out without removing the sump guard. To get access to the gearbox oil plugs, remove the front passenger side wheel. The drain plug is this 1/2 inch socket which sits directly below the drive shaft. 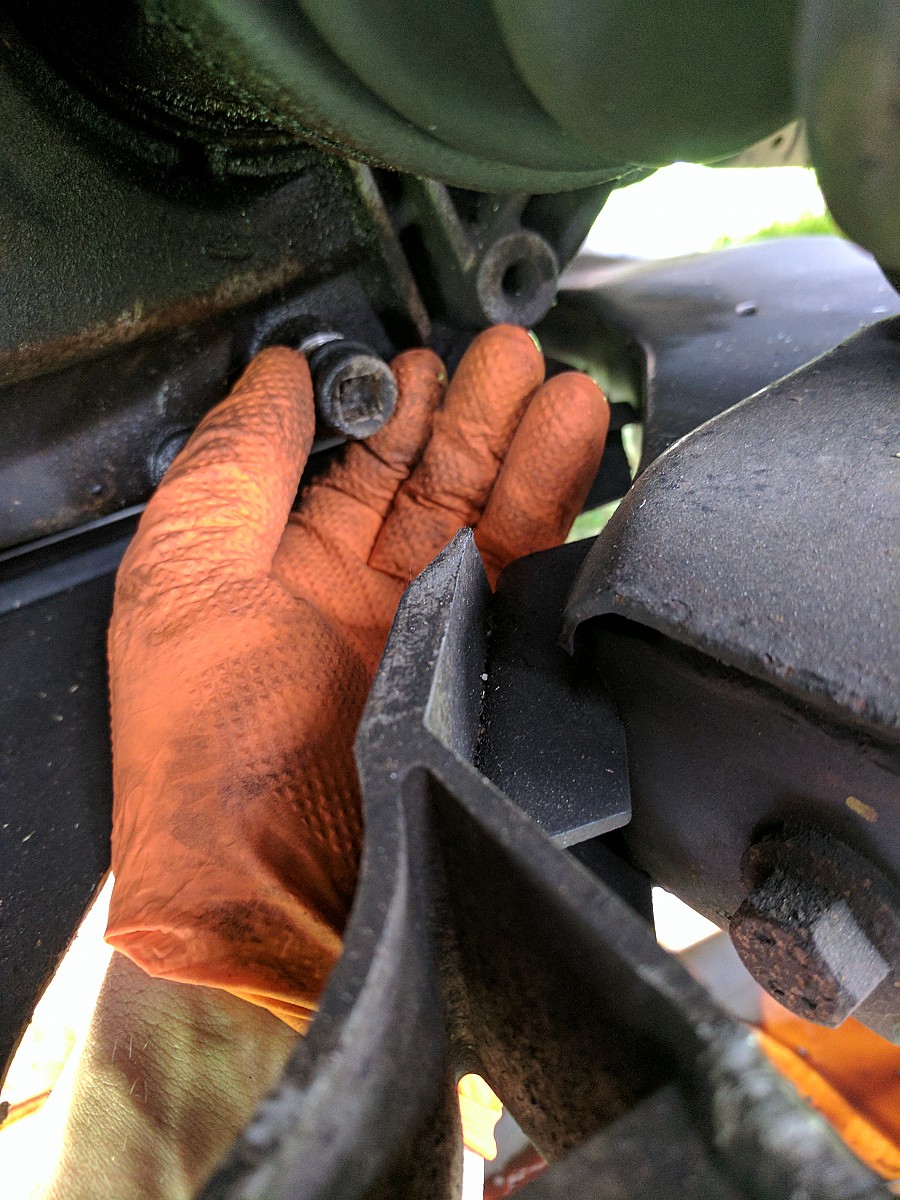 The filler plug is to the right of the drive shaft. 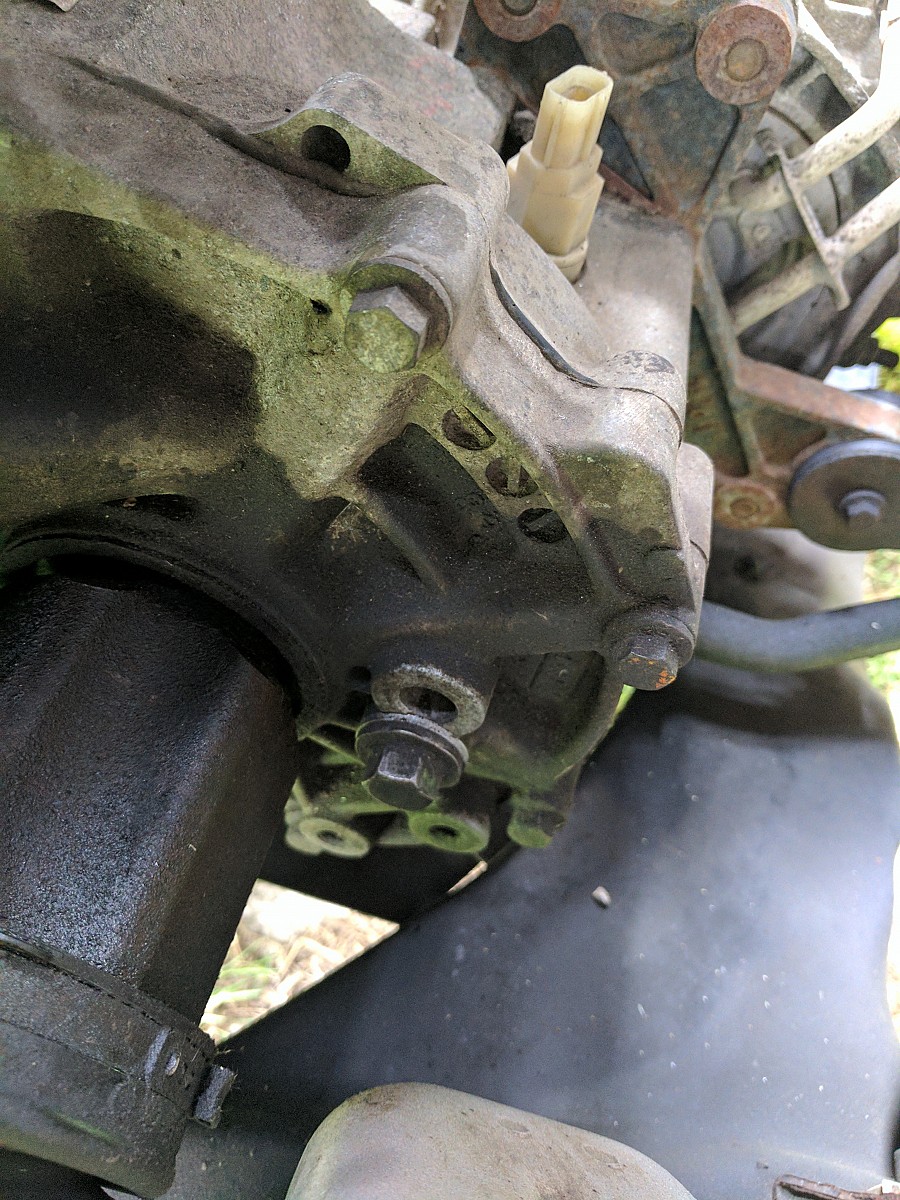 The oil that came out did not look too bad, but certainly had the burnt toast smell of bad oil. Once the oil was drained, and the plug reseated 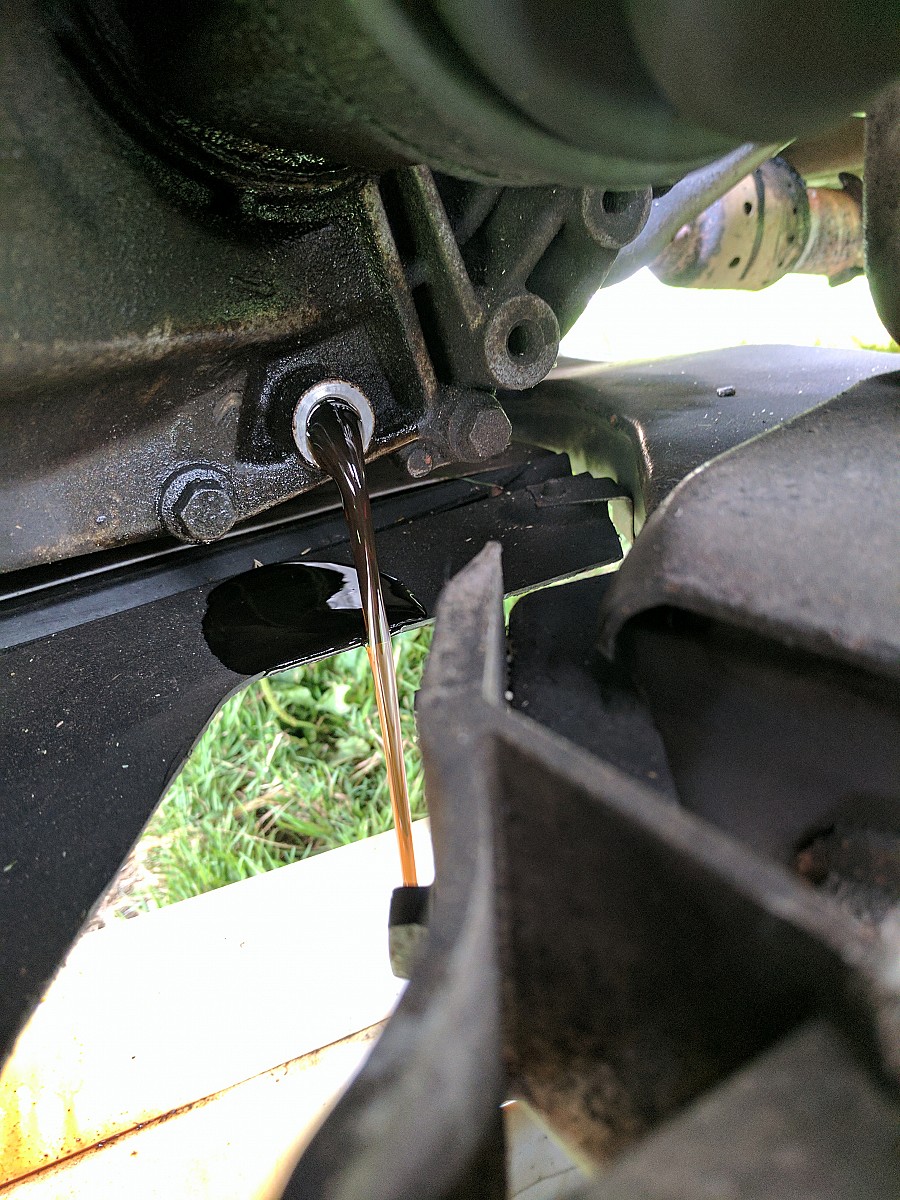 New oil was pumped into the top hole until it leaks (That is the scientific way to measure it), about 2.2 litres. A couple of cable ties to tidy everything back up and away we go.

It has not entirely fixed the issue and after a long trip, well the gears are still a little noisy. Reading around and the general feeling is “its a 20 year old Landrover gearbox, thats what they do” And even a replacement gearbox will likely have the same issue eventually as it likely the lack of the syncromesh is what causes the problem here.

And so, short of stripping out the whole gearbox and replacing the clutch and the springs, well, for now this will do!